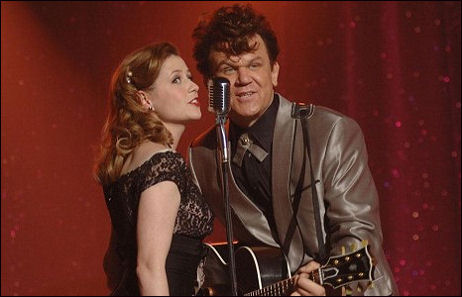 Carr says that “one of the surest signs that a trend is under way is that it has become worthy of parody,” and this Judd Apatow-produced, Jake Kasdan-directed satire “riffs through many of the genre’s tendencies.”

The article makes it clear that Carr has been shown a Walk Hard clip and heard a few songs from the film. (Probably the same clip and song selection being shown to L.A. journos tomorrow.) Apatow tells Carr in a phoner that music biopics are all cut from the same cloth.

“A small-town person grows up amidst a tragedy in his family, becomes a star, cheats on his first wife, goes into rehab, falls in love, cheats on his second wife, then sobers up again, experiences a final triumph and passes away peacefully or dies horribly,” Apatow said. “We all know these stories from VH1’s ‘Behind the Music,’ and even though we know what to expect, we still love watching them.”