I tried to write a 30 Minutes or Less review three times over the last five or six days, and it wouldn’t come. Mainly because I just sat in my seat and pretty much waited for it to be over. It’s strenuous but almost entirely unfunny — I know that much. I knew going in that I didn’t want to see a movie about a guy forced to assist in a robbery because a device with plastic explosive is strapped to his chest because it happened for real in ’03 and the guy died. Sue me but I just didn’t want to see it. Not into chest bombs.

As it turned out there was one thing I laughed at. One. I wrote about it seven days ago. Otherwise the film is thin. Strained and thin and kind of drab.

I just sat there feeling a little badly for Jesse Eisenberg. Well, not that badly (he’ll be fine) but what a cliff-drop after The Social Network. I guess it all boils down to my Danny McBride problem. I haven’t much a choice, of course, but I really don’t want to see his morlock/warlock eyes in another comedy again…really. He’s not funny. And director Ruben Fleischer ‘s stock is surely worth a lot less now that it was in the wake of Zombieland. Because the comic inspiration that fed into that Bill Murray zombie sequence is nowhere to be found in 30 Minutes. It’s not a funny idea, not a funny script…I’d just like to forget it if it’s all the same. Just let it go. 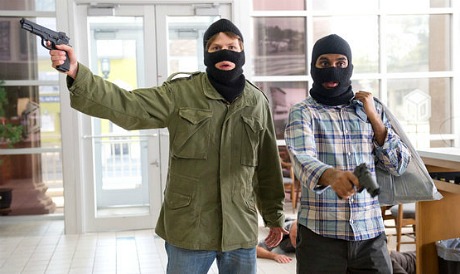