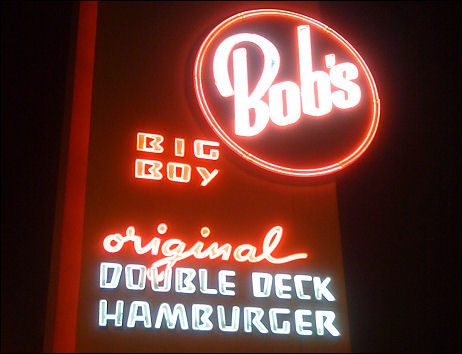 Wednesday, 6.25, 9:05 pm. I’ll probably never eat here again (don’t ask), but every so often at night I need to pull into the parking lot and lean against the car and just stare up at the damn sign and take in the early 1950s vibe. 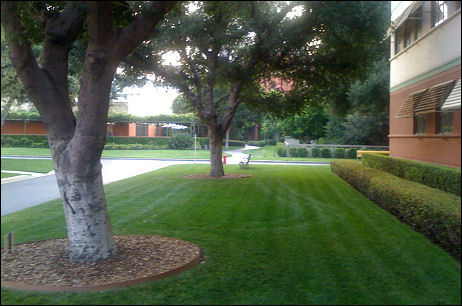 Wednesday, 6.25, 7:10 pm. A wee bit late to this evening’s WALL*E screening on the Disney lot, I was struck by the soothing green-lawn, tree-shade vibe just outside the Animation Building. A sweet, amusing and reasonably profound save-the-earth parable, WALL*E’s reliance on 85% visual, mostly dialogue-free storytelling (which makes it a kind of silent film) recalls the artistry of Charles Chaplin, Harry Langdon, Jacques Tati and other others whose style of performance art has been dormant for so many decades. It lives again. WALL*E is a masterpiece of its type. It’s going to win the Best Animated Feature Oscar. And the above-the-liners (Andrew Stanton, etc.) who are saying this is mainly a “robot love story” are deliberately disinforming the public. Of course, not everyone is going to understand how good this film is. A woman who saw it with me said to a young publicist on the way out, “It’s nice but I was bored.” So beware — some are going to say it’s not…whatever, snappilly entertaining enough according to current popcorn-munching standards. Anyone who says this, take my word, is a plebe and a moron. Six months into 2008 and WALL*E is one of the two or three best so far, if not the best of the year. It’s a major film and an occasion for enormous pride on Pixar’s part.