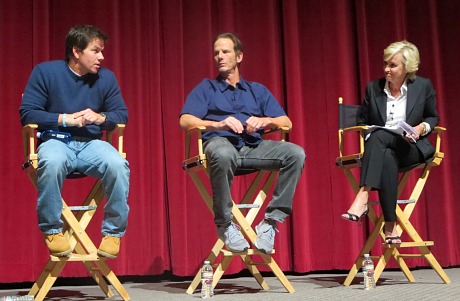 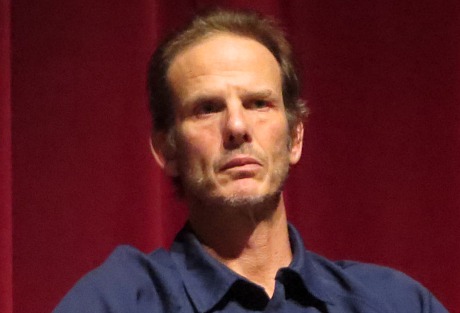 Lone Survivor is an unequivocating account (based on Marcus Luttrell‘s “Lone Survivor: The Eyewitness Account of Operation Redwing and the Lost Heroes of SEAL Team 10“) of a ghastly real-life episode that happened in Afghanistan eight years ago. Saluting this film during award season is, I suppose, some way of giving it up for the nearly 2300 U.S. soldiers who’ve died over there. Even with the knowledge that the 12-year-old Afghanistan conflict has accomplished little except as a symbolic, extremely expensive pushback against the U.S.-hating Islamic radicals.

Berg, Littrell, star Mark Wahlberg (who portrays Littrell) and Taylor Kitsch (who plays the late Lt. Michael P. Murphy) were interviewed by ardent Lone Survivor admirer Tina Brown in front of the crowd after the screening. I captured some stills and a couple of video portions on my trusty Canon Elph Powershot 330 HS. And then everyone retired to the lobby for coffee and drinks and mini-cupcakes.

Luttrell was the star of the q & a. Everything he said was plain and frank and unrefined in the best possible sense of that term. He’s calm and articulate and a straight shooter, but he also has that been-to-hell-and-back, worn-to-a-ragged-edge quality that veterans who’ve taken an especially heavy pounding sometimes exude. I love that he brought his golden retriever on stage with him. Dogs should be part of all interviews from here on. They should be allowed into restaurants and bars. They should hang out in offices and shopping malls. (I had a Golden Retriever when I was married.) 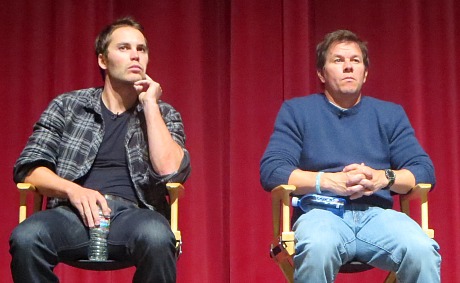 In Contention‘s Kris Tapley reported last night that the firefight sequence lasts 33 minutes, but I was looking at my watch all through it and can report that threat-wise things starts to get heavy and intense around the 45- or 50-minute mark and that the fierce activity lasts for nearly an hour if you don’t count a couple of downtime “break” periods lasting two or three or four minutes.

Tapley also wrote that while Lone Survivor is “a sterling monument to modern warfare [and] perhaps the most definitive big-screen account of the war in Afghanistan to date,” it “is not the sort of film to normally register with AMPAS” and that “it may have been a mistake to toss it into the race, where the bar of expectation is sometimes too high and the fight for attention at the box office can be even worse.” In my book an award season film is a creme de la creme effort that deserves to be assessed and saluted alongside other year-end, full-throttle efforts. Tapley isn’t wrong but to hell with AMPAS and their mushy, recessive, comfort-seeking. reality-averse attitudes. Good is good and respect must be paid.

Universal will debut Lone Survivor at AFI Fest on 11.12 and, as previously noted, open it limited on 12.27 before breaking wide in early ’14.

Rohan Chand, the cute Indian kid who costars in Jason Bateman‘s Bad Words (which I saw at last month’s Toronto Film Festival) has a small but significant third-act role. 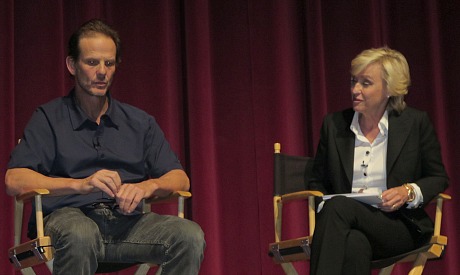