The key to a healthy economy and culture is a strong, stable, adequately compensated middle-class, but that ideal has been steadily undermined for over three decades, or since the financial deregulation policies of the Reagan era began to take hold. This is the central, unassailable message of Jacob Kornbluth and Robert Reich‘s Inequality For All — a wise and perceptive documentary that doesn’t push an agenda as much as lay it down on the kitchen table, plain and straight. The cancer of our culture is extreme income disparity. The 1% oligarchs own 38 percent of the financial wealth of America, while the bottom 60 percent owns 2.3 percent of the wealth in America. If this isn’t a recipe for anger and despair, I don’t know what would be. Moral and social rot will continue to manifest in the form of pathetic and tedious wealth envy — i.e., “if only I could live like Kim Kardashian.”

I realize that the greatest likelihood right now is that Hillary Clinton will win the 2016 Democratic Presidential nomination and that she’ll oppose Gov. Chris Christie, the most likely Republican nominee (or so it seems at this stage of the game). Christie will probably lose because of the unavoidable metaphor of his weight, and I’m convinced that 2016 is the year in which a woman, finally, will be elected President. But we need a serious left-progressive in the White House to try and focus the debate and hammer the right and balance out the general inequity. We can’t just succumb to the oligarchial agenda and the general drift of inequality and the dark social malaise that this situation will continue to assure.

Which is why I’d rather see U.S. Senator Elizabeth Warren, a woman who really gets it and has serious, fire-in the-belly convictions, snag the Democratic Presidential nomination rather than Clinton. And if Warren doesn’t run, I’d like to at least see U.S. Senator Bernie Sanders run in the primaries to at least push the agenda and say what needs to be heard again and again. 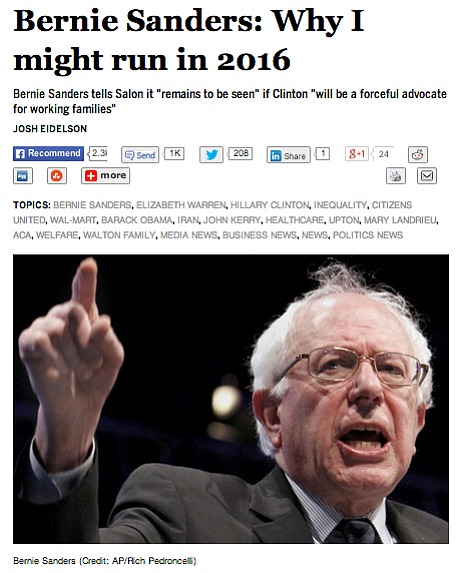