It felt calming to sit on the cool grass at last night’s Alamo Drafthouse Rolling Roadshow screening of On The Waterfront in Hoboken. The weather was perfect and the stars were out, and the soundtrack, at least, was damn near perfect. I could hear every vowel and consonant spoken by Marlon Brando, Eva Marie Saint, Rod Steiger, Karl Malden and Lee J. Cobb. 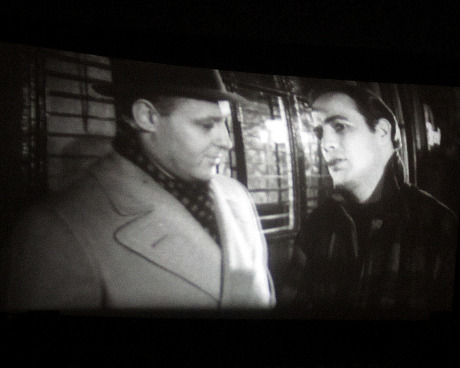 A Waterfront image shown last night on Hoboken’s Pier A, projected at 1.85:1.

But the projection, sad to say, was close to horrific. Hundreds of movie lovers turned out to witness a ceremonial tribute to a great film, and the Drafthouse guys couldn’t be bothered to respect appropriate projection standards. Nice. 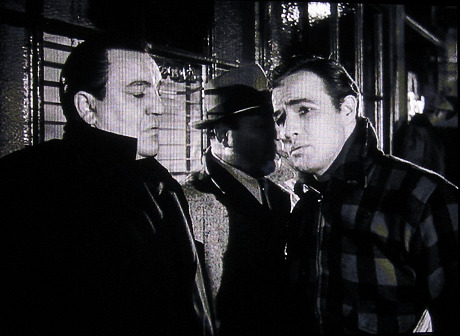 The same scene on the Waterfront DVD, which is presented at 1.37:1.

Instead of showing this 1954 classic at the proper 1.66:1 (or 1.37:1) aspect ratio, the Alamo guys showed it at 1.85:1, which lopped off huge portions of the top and bottom of the frames. On top of which the focus was almost comically soft. It was like watching a film underwater but without goggles. And the screen wasn’t properly anchored so river breezes caused it to billow every now and then.

And of course, the audience just sat there, content or complacent or happy just to be outdoors and lying on the grass. As I was, but c’mon. Most people are sheep when it comes to projection standards.

I spoke to the projectionist, a 30-something guy who didn’t seem to know all that much and was basically going “who, me, what?” I told him I’d worked as a projectionist years ago and that I knew from aperture plates, and that he was ruining the vibe by showing Waterfront at 1.85:1. (He was projecting actual film, by the way — I had expected a digital show.) I told him I’d seen Grover Crisp‘s Waterfront restoration in a screening room, and that it should be shown at either 1.37:1 or 1.66:1, but that going with 1.85:1 was vandalism. The guy was obviously no aspect-ratio fanatic. “Huh?”

There was a pre-gathering at The Dubliner starting around 6 pm. Sports writer Benn Schulberg, son of Waterfront screenwriter Budd Schulberg, spoke about his dad, the film, Brando, and director Elia Kazan. James T. Fisher, author of On The Irish Waterfront, an account of the real-life Waterfront history and the filming in Hoboken, also spoke. 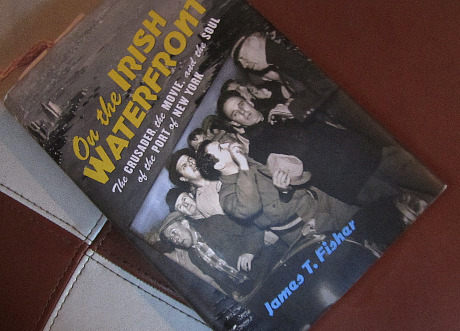 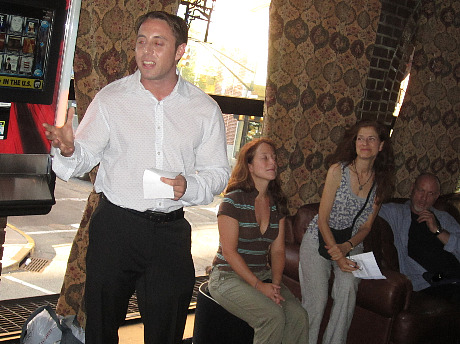 I asked both these guys if they had any inside info about a Waterfront Bluray eventually coming out. “Bluray?” I also asked if they knew of a really detailed On The Waterfront location website. They didn’t. They were also more interested in talking to the women at the gathering (especially a certain leggy blonde) than to me. A Hoboken Chamber of Commerce rep named Gerry Fallo said there’s a guy named Lenny Luizzi, a longtime Hoboken resident, who sometimes takes visitors on Waterfront location tours. His email is movielen@aol.com. Here’s an article about him. And here’s another.