We Want You Out

Variety‘s Matt Donnelly and Brent Lang are reporting that Searchlight co-chairpersons Nancy Utley and Stephen Gilula are “retiring” — i.e., have been shown the door by Disney management.

Another way to put it is that Gilula and Utley have been whacked like Joe Pesci‘s “Tommy” in Goodfellas. Disney management comment: “And that’s that. We had a problem, and there wasn’t nothin’ we could do about it.”

Gilula-Utley will be replaced by David Greenbaum and Matthew Greenfield, who are now co-presidents. They will report to Disney Studios Content chairman Alan Bergman and chief creative officer Alan Horn. Disney purchased Searchlight as part of its 2019 deal for the Murdoch family’s entertainment assets. 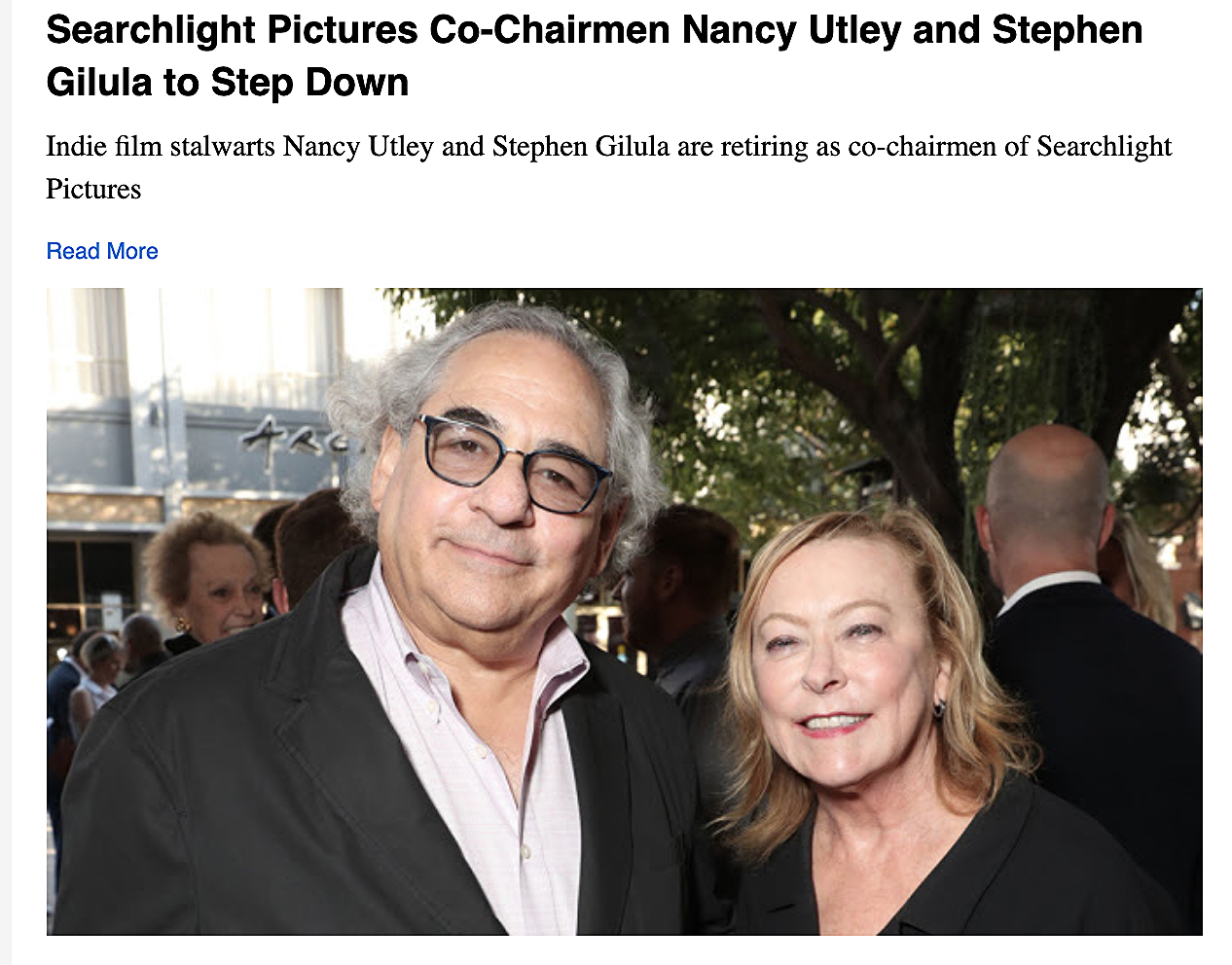 Intro: Much of the credit for Fox Searchlight’s remarkable performance must go to Gilula and Utley, co-chairmen of the studio since July 2018. Twenty-year veterans of the company, they were named presidents in 2009, succeeding Peter Rice, who took the helm in 2000. Now they’ve entered a new era with Disney’s acquisition of Fox this past March. Gilula, a former exhibitor who co-founded Landmark Theatres, recently took time out of his busy schedule to talk about Searchlight’s latest chapter and its highly successful run.

Lally: Here we are, nine months into the merger with Disney. Can you give me a status report on how things are going and what has changed?

Gilula: Well, the status report is all signs are really positive. It’s been really quite good. At a top-line level, as far as the kinds of movies we’re making and acquiring and how we’re releasing them, there’s a hundred percent unequivocal support. What was represented to us in the year-plus before the deal closed has all come true—everything that Disney indicated that they liked about Searchlight they want us to continue.”

HE comment: Either things suddenly changed or Gilula, not surprisingly, was wearing a “political” hat when he spoke to Lally.

Gilula: On the practical side, the logistical and organizational side, as with any merger we’re working through all the bureaucratic and administrative things in terms of policies that we operate under. But the core business of the kinds of movies we make, how we release them, and what our campaigns are, we have full support and we continue to have the same independence that we had under Fox. So that’s been fantastic.”

HE comment: I think it’s fantastic that things were so “fantastic” 14 months ago.

Bergman and Horn statement to Variety about the booting of Gillula and Utley: “Thanks to the stewardship and pitch-perfect creative instincts of Steve Gilula and Nancy Utley, Searchlight has cemented itself as one of the finest film studios in history, and we commend and thank them for their incredible leadership, especially throughout the integration of Searchlight at Disney. They are leaving the studio in the talented hands of Matthew Greenfield and David Greenbaum, who have been a critical part of Searchlight’s success over many years and we’re confident they will continue to set a course that keeps Searchlight on the industry’s leading edge.”

HE comment: Whatever prompted Disney to eject Giulula and Utley, Bergman and Horn aren’t inclined to share at this point in time. They felt a certain rapport with Greenfield and Greenbaum that was lacking with Gilula-Utley?