Here I am the last to speak up, but after reading Stephen Zeitchik‘s 12.17 L.A. Times piece about Wes Jones‘ College Republicans, I’m intrigued. If any HE script pallies have a PDF, please send along. College Republicans was recently praised as the most popular of the hot newbie scripts by Franklin Leonard, the creator-manager of the Black List. 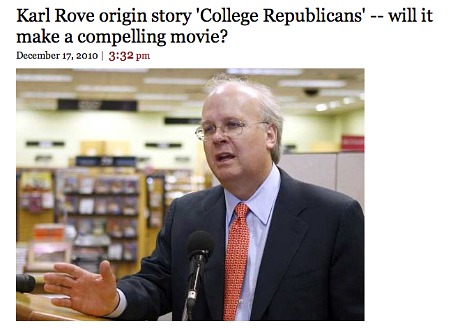 Leonard has placed Noah Oppenheim‘s Jackie in second place, right behind College Republicans, as the second most admired Black Lister with 47 votes. I beg to differ, as I explained on 4.15.10.

Note: My apologies to HE commenters, but I was obliged to delete and repost this story, which originally ran Saturday morning, due to a ridiculous server clock/time stamp issue created by the geniuses at Softlayer/Orbit the Planet, which is HE’s internet service provider for the time being. As a result (and I really couldn’t help this) all of yesterday’s comments were wiped out