The Weinstein Co. invited press and buyers to a Majestic Hotel preview of the company’s 2013 films. The crowd was shown trailer/footage reels for Ain’t Them Bodies Saints, Fruitvale Station, The Butler, August: Osage County, Mandela: Long Walk to Freedom, The Grandmaster, Grace of Monaco, Salinger, Only God Forgives, James Gray‘s The Immigrant and One Chance, a drama about opera-singer Paul Potts. 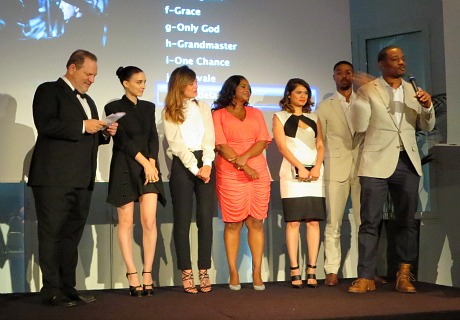 Based on the trailers shown, the likeliest Weinstein Co. Oscar contenders are John Wells‘ August: Osage County and Ryan Coogler‘s Fruitvale Station. If you ask me Twenty Feet From Stardom, which the Weinstein Co. acquired at Sundance, is a likely Best Documentary Feature Oscar contender but today’s presentation was about future releases. Ain’t Them Bodies Saints, which I saw at Sundance, is going to be a sizable critical hit and a likely Spirit Awards nominee.