Between allegedly positive responses at a recent East Coast test screening (as reported by Jordan Ruimy) and the likelihood of debuting at Telluride ’22,  She Said (Universal, 11.18), a Spotlight-resembling investigative journalism drama about the Harvey Weinstein sexual predator offenses, is looking like a Best Picture Oscar contender…right?

Or is it perhaps a bit less of a #MeToo-ish All The President Men and more of a Bombshell, Part II?

That said, Andre Braugher‘s performance as N.Y. Times exec editor Dean Baquet is, I suspect, unlikely to inspire the kind of reverence that greeted Jason Robards‘ performance as Ben Bradlee in Akan Pakula‘s All The President’s Men. For Baquet’s support of Kantor and Twohey’s reporting on Weinstein has since been overshadowed by his unleashing the forces of purist woke terror (1619 and BLM absolutism, Nikole Hannah-Jones, the absurd firing of Donald McNeil Jr.) in the Times newsroom and greenlighting the kind of harsh woke-scolding environment that led to Bari Weiss‘s resignation. 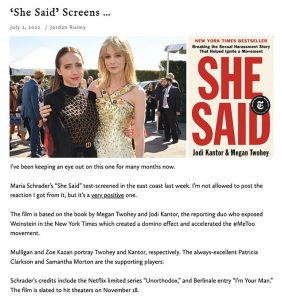 July 3, 2022by Jeffrey Wells44 Comments
« Previous post
Sheen Was There
Next post »
Joel Goodson Has Begun His Seventh Decade