The Weinstein Company has bought US rights to Sam Taylor Wood‘s Nowhere Boy, the John Lennon teenaged-years biopic that began principal photography on March 8th. (Latin American and German rights were also purchased.) I’ve read Matt Greenhalgh‘s screenplay, and the scruffy British dialogue sounds as true and authentic as it does in Greenhalgh’s script of Control, which, for me, is as good as it gets. 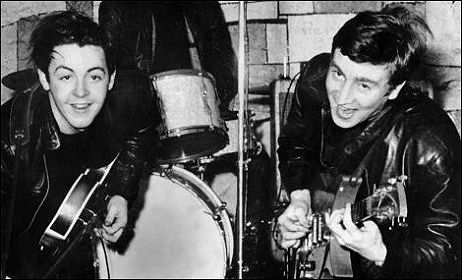 I posted a piece in late January that said “if you take out the born-during-the- German-blitz scene in 1940, the story spans from 1955 to 1960 — years of creative ferment and coming into one’s own.

“19 year-old Aaron Johnson (The Greatest) will obviously play Lennon from age 15 to 20 — not much of a stretch. They’d better get the light reddish brown hair color right. If they screw this up they’re dead.

“The great Kristin Scott Thomas will play Lennon’s Aunt Mimi, which is a larger, more expressive role than the part of Lennon’s mother Julia, who’s being played by Anne Marie Duff. The young Paul McCartney arrives during the last 20-odd pages, and generates, as you might expect, a significant flavor and force. Thomas Sangster (next in Jane Campion‘s Bright Star) will portray Macca.

“The story ends with Lennon and McCartney heading off to play an open-ended gig in Hamburg.”