The general feeling among those who attended last night’s special Westwood screening of Wim Wenders‘ Pina, a beautiful ballet doc shot in 3D, is that dance comes wonderfully alive when viewed with stereoscopic depth. Germany’s official submission for the Best Foreign Language Oscar is not just sublime in its own right, but proof that 3D is most transporting when it captures life in natural proportion, and not when the camera is going for large brawny spectacle. 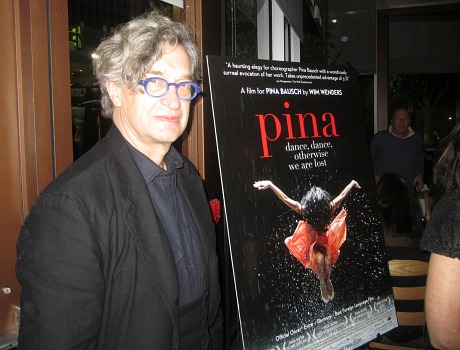 There are two reasons why Alfred Hitchcock‘s Dial M For Murder is one of my favorite 3D films. One, the scale couldn’t be smaller or more intimate, the entire thing taking place within a modest one-bedroom London apartment. And two, there are only two 3D pop-through shots — the scissors and the latch key. I’d love to see David Jones‘ Betrayal remastered in 3D with the same high-quality precision that James Cameron has reportedly put into the 3D remastering of Titanic.

I asked Wenders at the Pina after-party when The American Friend (’78), my favorite of all his films, will be out on Bluray. Next year, he said, via the Criterion Collection. It will be part of a series or a box set, apparently. I couldn’t hear as well as I wanted to but I think he said the package will include four of his films.

From Joe Morgenstern‘s mini-review of Pina in the Wall Street Journal: “Pina is a wondrously surreal evocation of the work of choreographer Pina Bausch. (She died two years ago, before she could see the finished film.) It’s also a fascinating–and successful–marriage of dance and technology. The 3-D process, deployed with restraint, gives weight and presence to the dancers’ bodies, yet keeps the camera at sufficient remove to preserve the impression of a performance on a theater stage.

“Images of joy, loss and pain succeed one another: a dreamscape of rock and water in a driving rain, a wordless drama aboard an urban monorail car, perilous exertions on the edge of a huge mining pit. Dancers throw themselves at each other with seeming indifference to the danger. Pina brings new meaning to the notion of a leap of faith, and new immediacy to filmed dance.” 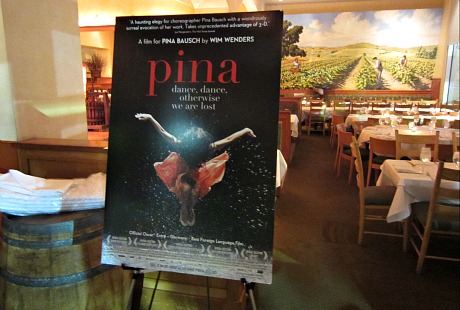