If It Weren’t For Cruel, Dark-Hearted Critics, Collateral Beauty Might Not Have Bombed 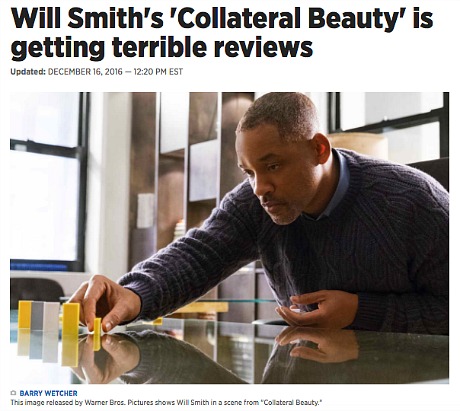 2nd Favorite HE quote: “Speaking with Deadline [Saturday] morning, a person close to the Collateral Beauty production declared that the film’s reviews were a ‘schoolyard assault‘.

D’Allesandro adds that a “pack-rat nature pervades unfortunately among reviewers…damned they are by their bosses should their opinion ever steer from the mainstream pack.” The terms is not “packrat” but “pile-on,” which definitely happens from time to time when critics en masse have decided that it’s safe to attack a bad film. But again, the bottom line is that Collateral Beauty stinks.

December 19, 2016by Jeffrey Wells38 Comments
« Previous post
Rank, Almost Comical Corruption of Rex Tillerson
Next post »
“Why Do We Have Two Dakotas?”