Curiously, almost bizarrely, Darjeeling Limited director Wes Anderson has given his critics all the ammo they need and then some by freely discussing his whimsical, mercurial, Wes-world lifestyle (thus spurring thoughts about how this may have affected the style and content of his films) in a New York interview by David Amsden called “The Life Obsessive.” 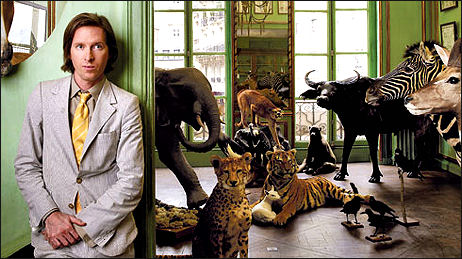 Anderson, says Amsden, is “someone who has constructed a life almost preposterously conducive to the pursuit of fantastical whims. [And yet] one gets the impression that even Anderson, these days, can find living in Wes’s world a bit claustrophobic.

At one point Amsden mentions a recent Atlantic Monthly essay by Michael Hirschorn which “argued that, as a culture, we are ‘drowning in quirk,’ an aesthetic he defines as the ’embrace of the odd against the blandly mainstream.’ Citing Anderson’s movies as a prime example, Hirschorn claims that the problem with quirk is that it ‘can quickly go from an effective narrative tool to an end in itself.’

“You need only watch a few frames of one of his movies to spot it as an Anderson production,” Amsden goes on to say. “Though he is originally from Texas, there is something distinctively European in his obsession with aesthetics: a belief that the way something looks is what dictates how it will make you feel. His impeccably composed wide-angle shots have the feeling of a childhood fantasy: wistful, more than a bit ridiculous, with a darkness creeping in at the edges.

“Pepper in some resurrected classic-rock songs; deadpan dialogue; themes of failure, nostalgia, and fractured families; and the result, at its best, is a world unto itself.”

I’m not heartened by Amsden’s observations at all. Anderson is obviously one of the most distinctive signature filmmakers working today, and he used to be one of our finest. He can solve his problem by simply crawling out of his own rarifed ass and exposing himself to some form of raw, unruly, Hemingway-esque experience — a life without stuffed African animals or spur-of-the-moment train trips to Rome or specially tailored seersucker suits.

Career-saving suggestions for Anderson to consider: (a) do a T.E. Lawrence and join the Army or Marines as a raw recruit with a fake name, and serve in Iraq for a year; (b) get a job in Iraq as an ambulance driver, and have an affair with a nurse if he gets sent to the hospital if and when he gets maimed by an I.E. D.; (c) do a T.E. Lawrence and take a low-level job in some blue-collar industry in Missouri or Mississippi for a year, again under a fake name; (d) do a John Pierson and run a repertory movie theatre in some far-off territory for a year — soak up the exotic atmosphere, get to know the locals, etc.