On 9.20.18 The Guardian‘s Alex Godfrey reported that director Cary Fukunaga was “still working with playwright David Auburn on an adaptation of Stanley Kubrick’s unmade Napoleon film as a Steven Spielberg-produced miniseries for HBO.”

But of course, the Napoleon project was put aside when Fukanaga was hired to direct Bond #25 or No Time To Die, which will open stateside on 4.8.20. Fukunaga will no doubt be 007-ing until the very last minute, and then there’s the long promotional trail.

If he’s still into the Napoleon project he and Auburn could begin again in the early summer, and then, if HBO is still passionately engaged, perhaps begin shooting sometime in late ’20 or ’21.

The Napoleon-Spielberg-Fukanaga project was first reported in May 2016. The logistical likelihood of shooting not beginning for roughly another nine months to a year and perhaps into ’21…well, do the math. Four to five years of planning, writing, strategizing and whatnot — this is one of those elephantine undertakings that doesn’t seem likely to actually go before cameras. Too costly, too laborious…a sprawling, elephant-sized epic.

Honestly? I’ll be deeply surprised if it happens. 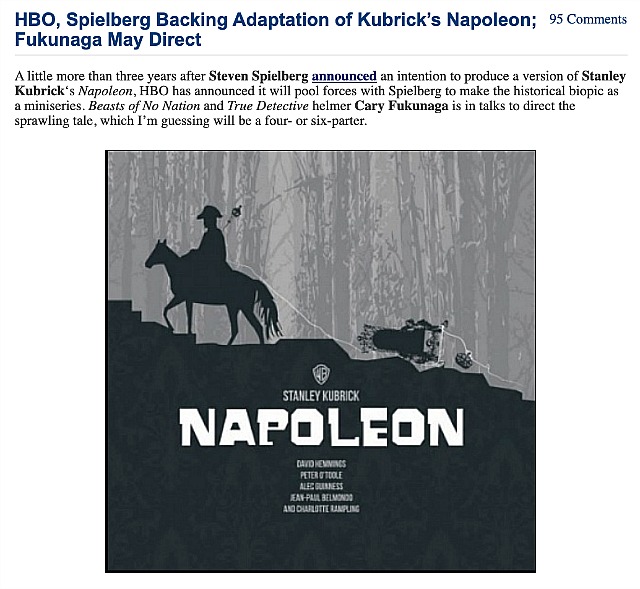 From my 5.20.16 piece on the project: “It needs to be understood that in various ways (tonally, stylistically, attitude-wise) we’ve already seen Kubrick’s Napoleon. It’s called Barry Lyndon.

“A reading of the 9.29.69 screenplay makes it fairly obvious that Napoleon would have had the same vibe as Barry Lyndon, and been spoken the same way and framed and paced the same way. Okay, the lead character would be a determined egomaniacal genius instead of an amoral Irish lout and Napoleon would have more than one battle scene, but beyond these and other distinctions we’re talking the same line of country. Everything Kubrick desperately wanted to accomplish or put into Napoleon he put into Lyndon — simple.”

“It’s no surprise then that Fukunaga is an enormous [Kubrick] fan. After True Detective aired, he was hired to adapt and direct Kubrick’s unmade Napoleon film as a Steven Spielberg-produced mini-series for HBO, under the guidance of Kubrick’s long-time executive producer Jan Harlan. ‘We want to carry the torch in a way that embodies the spirit of what he was trying to achieve,’ says Fukunaga, visibly excited. In a couple of weeks he will head to the library in Kubrick’s St. Albans home to continue work with Harlan.

“’I’ve been there once before,’ he says. ‘You can become jaded, working in this industry for so long, but there are moments like, ‘Holy fuck. I’m on holy, holy ground.’” Well, quite: Kubrick is buried there in the garden. He nods. ‘Jan brought me to his grave and introduced me to him,’ he says, awed. ‘That was a momentous occasion.” No need for the psychotropics.”