Too many actresses are treated like race horses. They’re allowed to race for a certain period, and then they “age out” and are put out to pasture. Is this what’s happened to Rene Russo? She was looking good during the Clinton years, gliding along there in the early to late ’90s (In the Line of Fire, Get Shorty, Tin Cup, The Thomas Crown Affair). And then…? 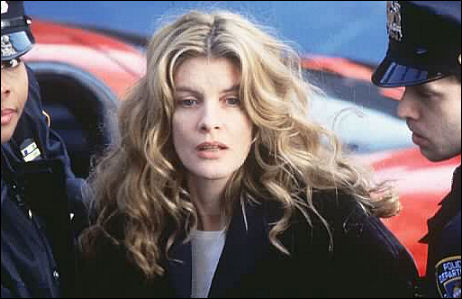 The last beam-ups were costarring roles in two movies released three years ago — Two for the Money with Al Pacino and Yours, Mine and Ours with Dennis Quaid — and then she went poof. And now off the radar for three years and counting. Not fair, not right — women of Russo’s age (born in ’54) are in their prime and very watchable.
Hey, what about Madeleine Stowe? I saw her at the Aero Theatre a few months ago with her husband and child, but she’s been MIA for a good while also. Several years. I heard she wrote a good script a few years ago (a western?) that people liked and wanted to make, but they said no when she said “I have to star in it.” She wouldn’t budge, the interest faded and it went away. That’s the story I was told.