Which 2011 Nominees Have Present-Tense Currency?

Of the nine Best Picture nominees among films that were released in 2011, three are eminently re-watchable and regarded by the Movie Godz as quietly vibrant and human and truly salutable — Bennett Miller‘s Moneyball, Alexander Payne and Jim Taylor‘s The Descendants and Woody Allen‘s Midnight in Paris. You can re-watch these films once a year for the rest of your life, and you’ll never be sorry.

Terrence Malick‘s The Tree of Life, a competing Best Picture nominee, was the first of Malick’s “whispering soup movies”…swoony, swirling meditations about birth, life, love, beautiful women as spiritual-vibe vessels, nothingness and everythingness and leaves on the ground, not to mention granules of sand. Tree was applauded as a major stand-out at first, but after Malick kept making this kind of movie over and over and over (To the Wonder, Knight of Cups, Song to Song, A Hidden Life) and taking up to two years to edit them, people realized he was mainly wallowing in a kind of hazy mist of meandering mysticism and distracted indecision…that he was basically jizz-wanking. 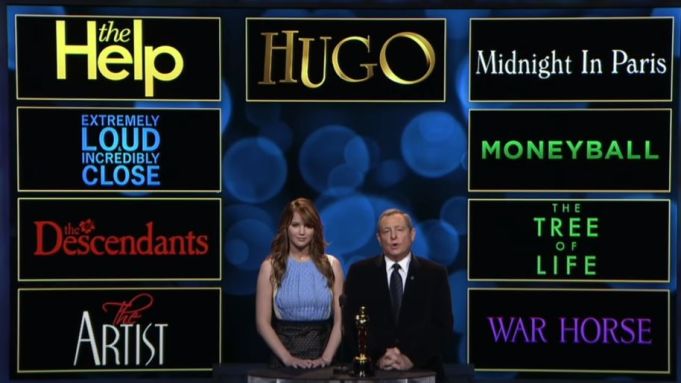 The remaining five Best Picture nominees are regarded today as over-praised (as in “what were they thinking?”) embarassments — earnest, plodding films that nobody and I mean nobody has re-visited.

I’m speaking of Michel Hazanavicius‘ The Artist, a stunt movie beloved by the chumps (I repeatedly begged the critics groups to stop giving it their Best Picture trophies and they wouldn’t listen) and the winner, of course, of the Best Picture Oscar.

Stephen Daldry‘s Extremely Loud & Incredibly Close was close to unwatchable even in 2011. Tate Taylor‘s The Help was agony to sit through; ditto Martin Scorsese‘s Hugo (the one portion that everyone admired was the flourishy tribute to Georges Méliès at the very end). Steven Spielberg‘s War Horse did decent business and was embraced by the middle-class sentimentalists, but nobody will ever re-watch this fucking movie…please. 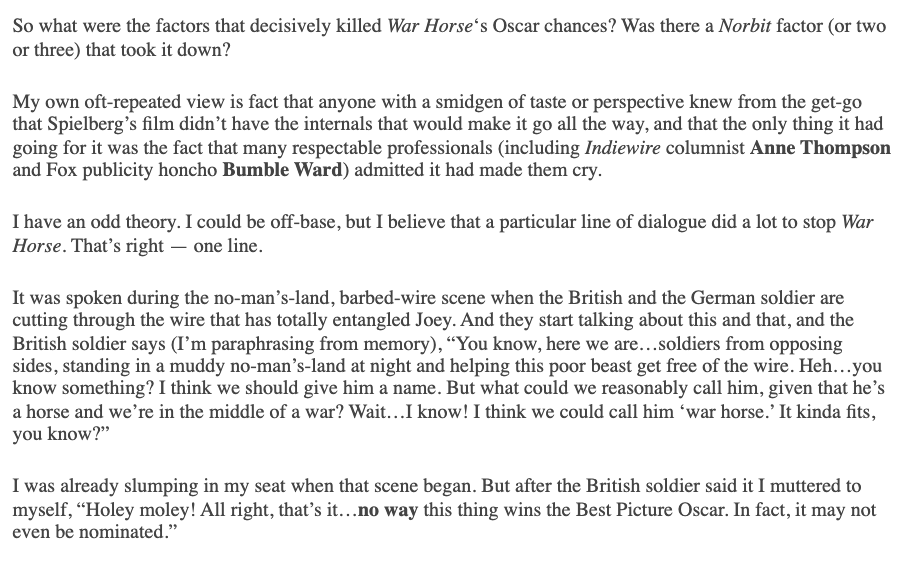