Here are four non-finalized versions of Reid Rosefelt‘s one-sheet for Turn Me On Dammit! (New Yorker, 3.30). He’s asking HE readers to rate them in order of preference plus offer up any comments that might occur. The line illustration is by Kelly Lasserre. Three of the color treatments are by Ron Ramsland of New Yorker Films; one is by Rosefelt. 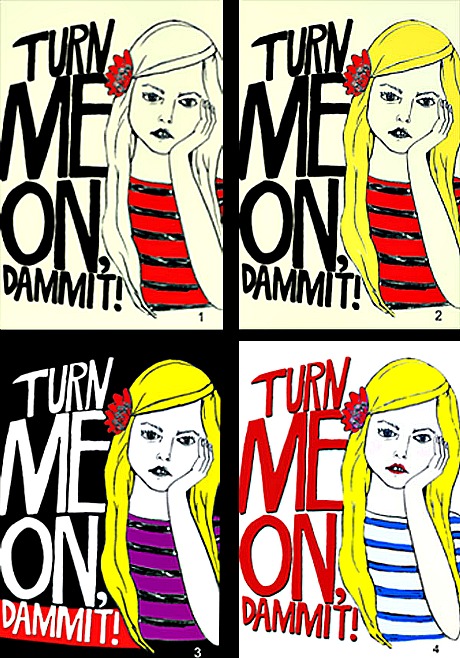 “As you can see the poster is not in any stretch of the imagination in Saul Bass territory,” Rosefelt writes. “Along the way I had to make compromises and one of them was that the girl in the ad had to resemble Helene Bergsholm, the star of the film.

I have bigger individual versions which I’ll post later.

Here’s my Palm Springs Film Festival review of the film. And here’s a rave from anomalousmaterial.com’s Nick Prigge, and an excerpt:

“It might seem strange that a film featuring a fairly gratuitous moment of, uh, (brief) full frontal nudity when considering its most essential plot point is a male counterpart of our 15 year old female protagonist taking out his, uh, ‘dick’ and pointing it at her is more subtle, thoughtful and genuine than just about any teen sex comedy of any nationality with no (brief) full frontal nudity of any kind that I’ve come across but that’s the truth. It’s one of the best films of 2011.

“It’s not unlike Mean Girls in the way that it displays how quickly and brutally these high-schooled aged ladies can turn against one another and how one little white lie can transform a life. What it doesn’t do, though, is make these rather harsh story complications an excuse for comedic setpieces and exaggerated characters. There is funny to be seen and heard, to be sure, plenty of it, but what could have been crass is just honest.”