Right after last night’s screening of The Counselor I drove over to the Landmark Cinema plex at the Westside Pavillion for what was basically an illogical reason. (I’ll explain in a second.) I was hanging out in the lobby when I noticed Jane Fonda emerging from one of the theatres with her little white dog Tulea, a Coton de Tulear, in her arms. I figured she had just seen All Is Lost as she and Robert Redford made Barefooot in the Park and Electric Horseman together. But my first thought wasn’t “cool…Jane Fonda and her dog seeing a Redford film!” My first thought was “cool…Landmark lets people bring their dogs to movies!” Even though they probably don’t. They probably made an exception for Fonda because she’s Fonda. 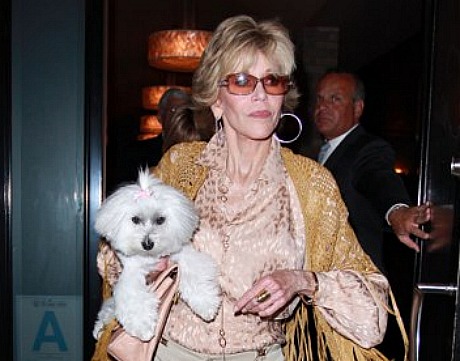 But I love the idea of bringing your dog to a film. I went up to the Landmark manager and said, “That’s so great that you let people bring their dogs to your theatre!” I was half-putting him on, of course, but he smiled and said, “Yeah, well…heh-heh.” I told him that I loved the fact that some restaurants in Paris let people bring their dogs along and that this was an extension of that largesse. It’s great watching a film with your dog or your cat. My cats watch Bluays with me all the time.

I didn’t say anything to Fonda although we spoke once at the Savannah Film Festival about 12 years ago (Bobby Zarem introduced us). I also said “hi” to her and boyfriend Richard Perry at a Silver Linings Playbook party at the Chateau Marmont last December. Fonda is clearly in great shape. I’m about to say something a bit declasse, but I was very impressed with the fact that she has an appealing derriere. If you have a nice butt at age 75, you’re definitely doing something right in terms of exercise and diet. Or you just have good genes.

I went to the Landmark a little after 9 pm because I wanted to buy a copy of Cormac McCarthy’s published screenplay of The Counselor so I could review some of the plot details, and I was hoping that the Barnes and Noble bookstore might still be open. Dumbass that I sometimes am, I’d forgotten that the bookstore closed eight or nine months ago.