Wow…this Jason Whitlock column (which ran in the Wednesday, 4.11 edition of the Kansas City Star) about the Don Imus brouhaha is perhaps the boldest eyeball-to-eyeball, take-it-or-leave-it view I’ve read about this whole mess so far. 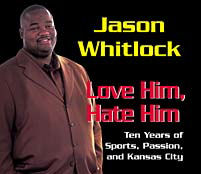 The guy’s obviously a traditionalist-conservative of some sort, but he’s more or less saying the same thing I said a day earlier (Tuesday, 4.10), to wit: “It’s obviously malicious and insensitive to denigrate people in this fashion (or any fashion), but everyone is dumping on everyone else these days — why single out Imus? It’s a shitstorm out there.”

What follows is a portion of Whitlock’s column, but by all means read the whole thing:

“I ain’t saying Jesse Jackson, Al Sharpton and [Rutgers women’s basketball team coach] Vivian Stringer are gold-diggas, but they don’t have the heart to mount a legitimate campaign against the real black-folk killas.

“It is us. At this time, we are our own worst enemies. We have allowed our youths to buy into a culture (hip hop) that has been perverted, corrupted and overtaken by prison culture. The music, attitude and behavior expressed in this culture is anti-black, anti-education, demeaning, self-destructive, pro-drug dealing and violent.

“Rather than confront this heinous enemy from within, we sit back and wait for someone like Imus to have a slip of the tongue and make the mistake of repeating the things we say about ourselves.

“It’s embarrassing. Dave Chappelle was offered $50 million to make racially insensitive jokes about black and white people on TV. He was hailed as a genius. Black comedians routinely crack jokes about white and black people, and we all laugh out loud.

“I’m no Don Imus apologist. He and his tiny companion Mike Lupica blasted me after I fell out with ESPN. Imus is a hack. But, in my view, he didn’t do anything outside the norm for shock jocks and comedians. He also offered an apology. That should’ve been the end of this whole affair. Instead, it’s only the beginning. It’s an opportunity for Stringer, Jackson and Sharpton to step on victim platforms and elevate themselves and their agendas.

“In the grand scheme, Don Imus is no threat to us in general and no threat to black women in particular. If his words are so powerful and so destructive and must be rebuked so forcefully, then what should we do about the idiot rappers on BET, MTV and every black-owned radio station in the country who use words much more powerful and much more destructive?

“I don’t listen or watch Imus’ show regularly. Has he at any point glorified selling crack cocaine to black women? Has he celebrated black men shooting each other randomly? Has he suggested in any way that it’s cool to be a baby-daddy rather than a husband and a parent? Does he tell his listeners that they’re suckers for pursuing education and that they’re selling out their race if they do?”