I should have thought longer and harder before writing that Akiva Goldsman most likely wasn’t to blame for Hancock‘s horrendous third act. HE reader “Richardson” did a good job earlier today of persuading me to reconsider. As he put it, “I can’t see how you can blame Will Smith for major script problems when Goldsman is the credited re-writer who defanged the script. Same as [he did on] I Am Legend. You can blame Smith for approving Goldsman as the writer, though, since he surely did that.” 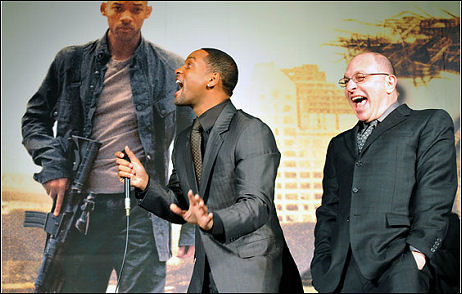 Only in the film industry have I seen people laugh so uproariously and so obsequiously as Akiva Goldsman seems to be doing here. When you get to this town you soon learn that the vast majority of funny things that movie stars say and do are often hugely funny, causing those in their presence to shriek and bust a gut.

I guess my judgment was clouded by the fact that I’m an admirer of Goldsman’s scripts of A Beautiful Mind and Cinderella Man, but I sorta kinda woke up when I re-read Richardson’s post late this afternoon and also after a veteran Los Angeles critic reminded me in an e-mail, “When in doubt, blame Akiva Goldsman!”
This same guy sent along me a copy of Vy Vincent Ngo‘s Tonight He Comes — the original script that eventually morphed into Hancock. “I haven’t had time to read this completely yet,” he said, “but from what I can tell it looks interesting and might serve as some sort of object lesson about what happens to scripts when they get tailored for a big-star tentpole. It’s worth checking out if you have a little time. I don’t know who sent this to me, but it’s obvious he doesn’t care who sees it at this point.”
The problem is that Ngo’s 126-page script isn’t dated, and it’s missing page 125. In any case, if anyone wants to read it I’ll send it along.
Here’s the letter that accompanied the script: “It’s always frustrating to read movie reviews in which the writing is slammed. Screenwriters are easy targets, but they’re often innocent bystanders in the development process. If you want to know what Hancock looked like before all the cooks in the kitchen got their grubby paws on it, here’s an earlier draft that shows the writer’s true vision.
“If you take the time to read it you’ll discover that it was once a very promising story before the bigwigs crapped it up. You can’t blame the writer for that.”
Anyway, here it is. It would be better, of course, if I could find a version that contains page 125. If anyone has a PDF with all the pages, please send along.