Who Was J. Edgar Hoover?

Given what I’ve been hearing for years about widespread ignorance among GenX and GenY’s about American history, the possibility that a significant percentage of under-40s or certainly under-30s not having clue #1 about who J. Edgar Hoover was doesn’t sound like a huge stretch. So I would guess Warner Bros. marketing is facing a slight hurdle in selling Clint Eastwood’s biopic to this demographic. 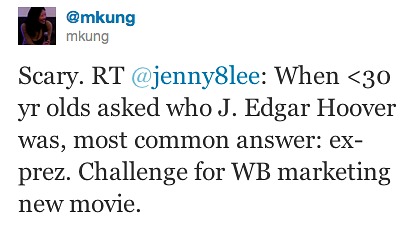 Once upon a time the brainiacs out there might have assumed that J. Edgar Hoover founded the Hoover Vacuum company back in the ’20s, but…well, maybe some do think that.

The Leonardo DiCaprio-starrer opens on 11.9.

Don’t kid yourself — more and more citizens living outside the big cities don’t know shit from shinola when it comes to basic historical data.

Ask Jay Leno about this. I saw him do a question segment with people on the street on the Tonight show a few years back, and he asked a young girl to give the last name of a recent U.S. president whose first name was “Jimmy.” She didn’t know. “He used to be a peanut farmer…” Leno hinted. The woman still didn’t know but she took a stab. “Jimmy Peanut?”, she said.

In a survey conducted in 2008, about 25% of 1,200 17-year-olds “were unable to correctly identify Adolf Hitler as Germany’s chancellor during World War II, instead identifying him variously as a munitions maker, an Austrian premier and the German Kaiser,” according to N.Y. Times piece that I’ve lost the URL for.

A CBS News story by Francie Grace noted that “allmost three out of four fourth-graders could not name which part of government passes laws. Most students thought it was the president. (It’s Congress.)

“About three out of four fourth-graders knew that July 4 celebrates the Declaration of Independence. But one in four thought it marked the end of the Civil War, the arrival of the Pilgrims or the start of the woman’s right to vote.

“More than half of 12th-graders, asked to pick a U.S. ally in World War II from a list of countries, thought the answer was Italy, Germany or Japan. (The correct answer was the Soviet Union.)”