“Why did I like Che so much? Because it seemed to me that Steven Soderbergh and his crew had somehow jumped into a time machine and emerged to plunk their cameras down and capture the life of Ernesto Guevera on film for this generation. Benicio Del Toro, in a performance of enormous beauty and restraint, slips under the skin of the character and simply inhabits him for four-and-a-half hours. No grandstanding, no huge emotional scenes — he simply is.” — In Contention‘s John Foote in an 11.9 posting. 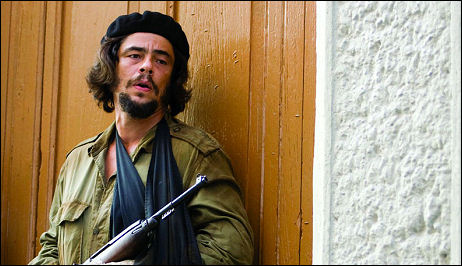 “It is a performance done largely with the eyes, and one must be paying attention to fully appreciate the weight and purity of the work. Ever watchful, Che takes in his surroundings in and stock of his men at all times. It may seem that there is not a lot going on with the portrayal. But he is capturing the essence of a man to utter perfection.

“Soderbergh makes no apology for his film. We have a sort of mainstream director who has also been a major force in the world of independent filmmaking. He makes a massive film, in Spanish no less, about one of the most iconic people of the 20th century. For me this is among the most daring achievements in film since…well, MIchael Cimino’s Heaven’s Gate. Soderbergh has given his film an urgency, an immediacy that’s breathtaking to be a part of.

“Che is a film destined to be discovered, I think, by future generations. While it is a historical film, which the Academy usually embraces, it is also a demanding film, asking that the viewer read subtitles, that they sit for a long time, and that they patiently explore the life of this man, with very few large emotional moments.”