Why “Reign” is Holding

If you haven’t read my early-bird piece about Mike Binder‘s Reign O’er Me, please do so now. It’ll prepare you more fully for the disappointing but not altogether surprising news that Reign won’t be opening on 12.1 after all. Columbia is going for a March or April ’07 opening, and here’s why: 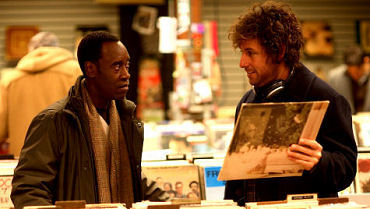 (1) Columbia has a heavy fall/Xmas slate anyway (four films) and they didn’t want to add another film to that list in the first place, although jazzed reactions to early screenings of Reign told them they have something that works in a big way, and not just with journos like myself;
(2) There’s no question that Adam Sandler‘s performance (he plays a Manhattan dentist caught in an emotional shut-down mode over his wife and daughters having been killed on 9.11) would have stirred talk about this or that acting honor, but Columbia already has two funny guys giving dramatic performances in a pair of high-profile Oscar bait movies — Will Ferrell in Stranger Than Fiction and Will Smith in The Pursuit of Happyness — so do the math;
(3) This weekend’s low-key response to World Trade Center suggests that resistance to 9/11-themed movies is persisting wthin certain demos, and it may be the better part of wisdom to ease up on any more films in this vein and try again in the spring (even though Reign O’er Me uses the World Trade Center backdrop very sparingly);
(4) Reign‘s test screening numbers have been very good, but Columbia has picked up indications that some critics might not be inclined to give a drama with Sandler (who’s despised in elite critical circles) a fair shake; and…
(5) Columbia would release it on 12.1 anyway if Sandler, a very big Sony gorilla, had stood up, planted his feet and said he really wanted it released this year — but he didn’t quite do that. But he did say no print interviews when it does come out, which will make selling the film a bit of an uphill effort;
(6) Columbia feels it can give Reign O’er Me a more enthusiastic, great-guns launch in March/April than early December. It’s a less crazy time and there’s not as much stuff pulling everyone’s attention every which way.