So where did that Ruby Dee SAG award for Best Supporting Actress come from? Four words: “sentiment” and “no DVD mailings.” 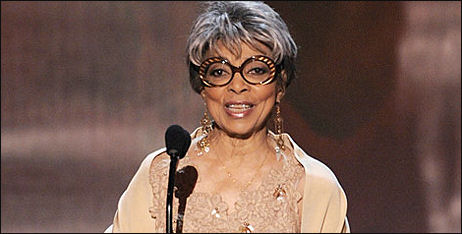 Apart from mass SAG mailings of Into The Wild DVDs, which benefitted the barely-in-the-race Catherine Keener, DVD screeners of the films starring the major nominees in this category — American Gangster‘s Dee, Gone Baby Gone‘s Amy Ryan, I’m Not There‘s Cate Blanchett and Michael Clayton‘s Tilda Swinton — were not, I’m told, sent to the SAG membership. In Pete Hammond‘s view, that levelled the playing field “and opened the door to the sentimental favorite.”
Yeah, but why? Dee’s performance, after all, is basically a one-scene, telling-off-her-gangster-son thing. It’s good but not superb. It’s certainly not in the realm of Beatrice Straight‘s Oscar-winning turn for her one big scene in Network. Dee gave a very strong performance for what it was, but she’s more or less ice-skated into the Oscar competition. She’s no match for Blanchett’s Jude or Ryan’s coked-out Dorchester mom. People realize that, I think.