Variety‘s Allison James reported some inside dope this morning about why Woody Allen‘s Cassandra’s Dream wasn’t included in the Cannes Film Festival lineup: “The new British crimer, starring Ewan McGregor and Colin Farrell, was offered the closing night slot,” she wrote, “but discussions came to an end when Allen balked at that idea.” 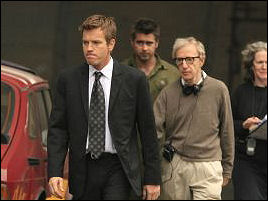 Allen got pissy, in all likelihood, because being offered the closing-night slot is generally regarded as a friendly backhanded compliment. Draw your own conclusions about how Cassandra’s Dream stacks up in the eyes of the festival programmers compared to Allen’s Match Point, which was given a prime middle-of-the-festival slot two years ago.

I happened upon a massive plot spoiler on the Cassandra’s Dream Wikipedia page, and all I’ll say is that it’s a very dark piece — considerably darker than Match Point. Okay, one other thing: the most literal interpretation of the title is that it’s the name of a sailing craft.