Those who see Spike Jonze‘s Where The Wild Things Are without knowing how skimpy the narrative is in the original Maurice Sendak pictutre book “are excused for feeling a little let down,” writes The Gothamist‘s John Del Signore. 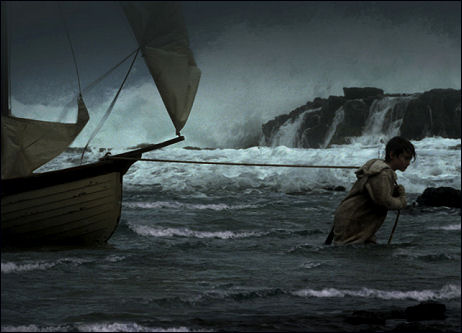 From Spike Jonze’s Where The Wild Things Are.

“But is there anyone who didn’t fall for Where the Wild Things Are as a child? The book casts a hell of a spell, and Jonze and screenwriter Dave Eggers miraculously succeed in recreating its elusive essence. This is a movie that makes you want to call your mother, and that’s not something you can say about most studio pictures. Not even Dr. Dolittle 2.

“Ultimately, Where the Wild Things Are stays interesting, despite its subdued narrative arc, because it’s an unabashedly heartfelt meditation on the primal emotions that overwhelm us in childhood. It floats along on the strength of its raw sincerity and sharp wits, and if at times it verges on sentimentality, the sentiment is not unearned. It’s rare for a big-budget movie to dare to be this melancholy without any bullshit, cloying contrivances.”