Will Oz Be Wired…or Not?

Warner Home Video’s Blu-ray restoration of The Wizard of Oz will be out less than a month from now, debuting Tuesday, 9.29. The restored classic will also have a one-day showing on screens nationwide on 9.23, and a special 11 am screening at Manhattan’s Alice Tully Hall (a program presented by the New York Film Festival) on Saturday, 9.26. 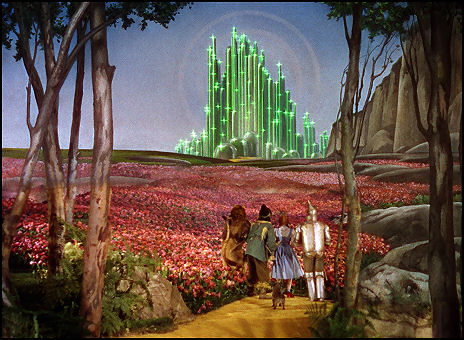 But no one has yet spoken about the key qualitative aspect regarding this upgrade of America’s most beloved family film. In a phrase, the question every videophile across the nation will be asking as he/she opens up the Blu-ray package (or as they attend the Oz theatrical screenings) will be “what about the damn wires?”

Presumably the Blu-ray upgrade will look measurably sharper and more distinct than any video version seen before. But does this mean the wires that hold up Ray Bolger’s Scarecrow (to assist in the illusion that he’s hanging from a wooden post among the cornstalks) will look even more vivid than they did in the last Wizard of Oz upgrade, which came out in 2005? Ditto the wires that hold up those flying monkeys serving Margaret Hamilton‘s Wicked Witch of the West?

Nobody spotted the wires when The Wizard of Oz opened in 1939. They couldn’t have with the coarseness of film stock and 1939-era projection technology and the process of three-strip Technicolor alignment being what it was. And nobody ever spotted the wires on any of those TV showings in the ’50s, ’60s and ’70s, or on VHS or laser discs or even on early DVDs. But they were easily detectable on WHV’s 2005 Special Edition, and one can only guess how much clearer they’ll be on the new Blu-ray. Unless wiser heads have prevailed, of course.

One way to deal with the wires would be for the Wizard of Oz images to be slightly softened so as to bury them in a kind of simulated 1939 haze. But the smarter way — hello? — would be for the wires to be digitally erased. I would ask Warner Home Video’s George Feltenstein for a comment, but my experience is that WHV publicity always blows me off on questions like this. Today is Sunday — I’ll try them tomorrow morning.

Obviously the Blu-ray upgrade will be fighting itself if WHV technicians decide to soften the image. This would negate the improved clarity and improved three-strip alignment and the extra-sharp focus that could and should be a dividend of the new Blu-ray version, and is what people will certainly be looking for when they buy it. 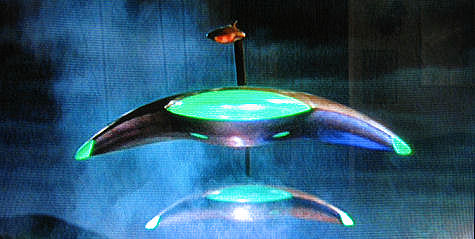 You can see the wires in the above photo (taken off my old 36″ West Hollywood TV) but if you have any kind of recently-manufactured big-ass flat screen, they look much more vivid than indicated here

Let’s hope and pray that WHV went with digital erasure on Oz. It’s been used by other video distributors in the remastering of older films with wire issues (including Mary Poppins and North by Northwest), and is clearly the only enlightened way to go. [Update: HE reader Drew McWeeny informs below that “the restoration work on Oz this time is nothing short of revelatory. There are about four places in the film where they removed wires, but otherwise their efforts were focused on making sure that this is the single best version of a three-strip Technicolor film that I’ve ever laid eyes on.”]

Digital wire removal infamously wasn’t used for the 2005 Paramount Home Video upgrade of the 1953 War of the Worlds.

Byron Haskin‘s sci-fi classic provides one of the lushest color-baths in Hollywood history and has always looked sumptuous. But the 2005 DVD pretty much ruined the suspension-of-disbelief element because of the way-too-visible cords holding up the Martian spaceships. You can see them plain as day during scenes of the initial assault against the military…a thicket of blue-tinted wires holding up each one.

Their presence makes it absurd when Clayton Forrester (Gene Barry) explains to General Mann (Les Tremayne) how the Martians keep their bright green ships aloft by using “some form of electro magnetic force” and “balancing the two poles” and so on. The illusion is shot.

The obvious solution was for Paramount Home Video to digitally erase the wires, but they didn’t ask for it (i.e., didn’t want to pay for it) and the pooch was screwed. It would have made perfect symmetrical sense to have done so. Just as digital technology had made this 1953 film look sharper than ever before, it followed that digital technology was needed to recreate the original illusion. The wires weren’t that visible 56 years ago, and they weren’t as visible in Paramount Home Video’s 1999 DVD. Obviously the 2005 War of the Worlds DVD was the provider of “detrimental revisionism” — it showed an image that wasn’t meant to be seen. 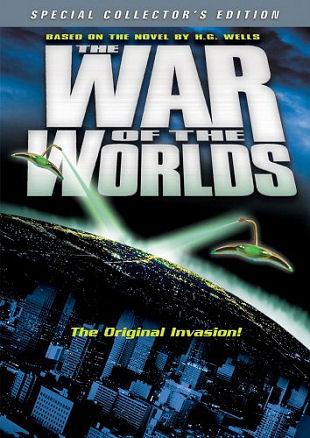 Four years ago I spoke about this issue with John Lowry, the head of Lowry Digital who’s done some great clean-up and/or digital restoration work on loads of classic films. He was the one hired by Paramount Home Video to clean up War of the Worlds .

“Our job is always to serve the wishes of the client…we do what the client says …and we didn’t have orders to clean up the wires,” he said. “Plus we were working on a very tight budget.”

Lowry faced a similar issue when he was doing the digital remastering of Alfred Hitchcock‘s North by Northwest. “We were working on the scene when the crop duster plane crashes into the gas truck,” he recalls, “and there were 25 or 30 frames of that particular shot in which you could see three wires holding up the rather large model of the airplane.

“But ever since then we’ve been very attuned to original artistic intent. And with today’s technology, anything that interferes with the story-telling process or which degrades that process, is dead wrong. We got rid of the wires on the Mary Poppins DVD, for the Disney people. We asked and they said ‘get rid of them’ but they had the money to do it. 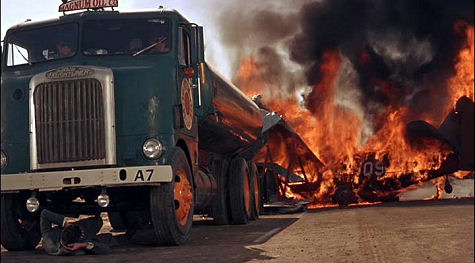