(a) No complete negative color seps exist on the original 1953 version of the film. The ending and dream sequence are GONE. It was lost when the UK version was made in 1954. I was 12 at the time!

(d) Bob Skotak and I have been discussing a restoration of the film for the last year and I am awaiting an estimate from a major lab in Burbank (recommended by Bob Harris) to do a new 4K restoration using all the available elements.

(e) There is a partial camera negative in Los Angeles. I looked into purchasing it several years ago and it was NOT COMPLETE and did not have the end sequences — titles and credits. Totally worthless.

“If you are in business it’s no secret the economy has been in the toilet the last eight years!

“I nonetheless believe after the first of the year we will either restore the film or a new licensee will come forth.

“My library has and is available for licensing! I am NOT hoarding anything.”

Thanks to Mr. Dante! 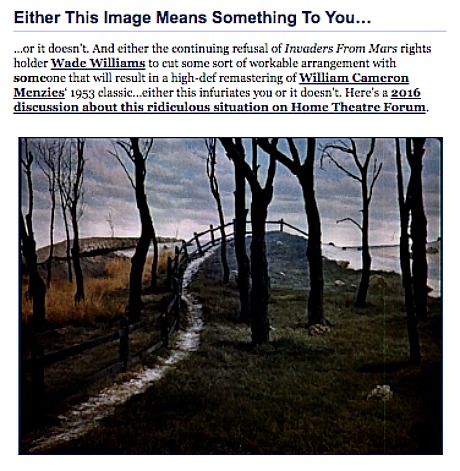