I’m not trying to be a nitpicker but I suffered a basic blockage with Alexander Payne‘s Nebraska that I couldn’t get around. The primary plot driver, contained in Bob Nelson‘s script, is a belief by Bruce Dern‘s Woody Grant, an ornery 70-something alcoholic who’s at least partly out to lunch, that he’s won a million dollar prize from a Publisher’s Clearing House sweepstakes drawing. 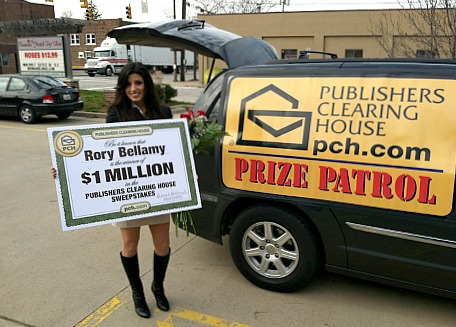 Now, it’s understood that Woody is foggy-headed, and we all know that older guys of this sort tend to be slow or clueless about certain aspects of modern life. I get that. That’s not the problem. The problem is that the concept of Publisher’s Clearing House winnings is an international joke, and not even the dumbest and oldest guy in the most under-educated country in the world would flirt with the possibility that someone might win something from these scumbags.

International awareness of Publisher’s Clearing House jackoffery was verified by a brief bit in Michael Ritchie‘s Fletch (’85), a mainstream comedy aimed at Joe and Jane Popcorn. Fletch contained no oblique references and used humor that Joe and Jane would get instantly. Alcoholic Woody was roughly 49 in 1985, and clear of mind as far as that went. And it wouldn’t have been especially odd for him to have seen Fletch with his wife or whomever.

And if he had, he would have chuckled at a scene in which Fletch (Chevy Chase) goes through his mailbox and pulls out a Publisher’s Clearing House letter. “Oooh — I think all of our problems may have just been solved!,” Chase says as the film cuts to an insert shot of the PCH envelope. “Ed McMahon — ho, yeah — I think I just won a million bucks! (opens it up) Yeah! Irwin M. Fletcher, you choose. Hoo-wee! Oh boy, I lost. Again. Sorry.”

My point is that Fletch wouldn’t have used that gag if the producers didn’t believe that the Woodys of the world would laugh, so it doesn’t matter if Woody actually saw Fletch or not. The point is that awareness of Publisher’s Clearing House had reached critical-mass levels by the mid ’80s. Tens of millions had become widely dismissive of PCH come-ons, and I just don’t believe that Woody would have totally forgotten about that Fletch gag when he got a PCH notification at age 76 or 77. Nobody is that forgetful…no one.

On top of which all not one of the in-laws and old friends of Woody’s who hear about his having won a million bucks from Publisher’s Clearing House…not one of them of them raises an eyebrow or smells the faint whiff of bullshit. All they want to do is talk to Woody about him paying them money that he owes them. If a friend of mine to whom I’d lent money had told me he’s expecting to come into a lot of cash from the tooth fairy, my first reaction wouldn’t be “oh, great — now you can pay me back.” My first reaction would be “the tooth fairy?”