In a weird roundabout way the Golden Globes seem to have a bit more integrity this morning due to last night’s double-awarding of Kate Winslet — a Best Supporting Actress award for her performance in The Reader and a Best Actress trophy for her work in Revolutionary Road. But in another way the HFPA looks like the same old shop of whores. 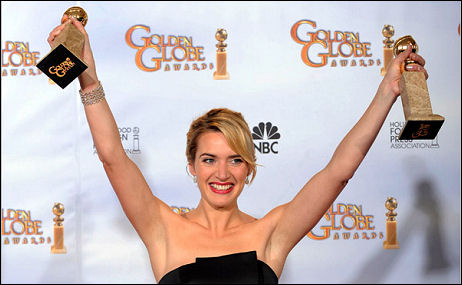 We all believe that the Hollywood Foreign Press Association — the ultimate organization for obsequious celebrity suck-upping — “cooks” their nominations so as to ensure as many big names as possible showing up for the GG telecast. By this I believe that the ratings-mindful membership knows exactly who to nominate — no homelies, no dull indie-realmers (or as few as possible), and mostly big-name glamour types.

I don’t think the HFPA “cooks” the winners, but if I’d been tabulating this year’s votes I might well have gone to HFPA president Jorge Camara and said, “Jorge — why does Kate Winslet have to win two awards? Isn’t this a bit much? How does anyone figure her role in The Reader was supporting, for one thing? And what about the wonderful Viola Davis in Doubt? Or Penelope Cruz in Vicky Cristina Barcelona? Those were fierce blazing performances. It just seems excessive to give two awards to Winslet…no?”

But the fact that she got two tells us nobody went to Camara and said,”C’mon, man…let’s fix this.” It tells us that the left hand didn’t know what the right hand was doing. Nobody cooked anything. Anyone trying to fix the results would have thought like the rest of us — that Kate didn’t have to win twice and that Davis and Cruz really deserved their moment in the sun.

But it also tells us that the HFPA are huge bend-overs in that they totally bought the “Kate is finally due after all those years of being nominated and not winning an Oscar” argument. They wanted to be the good guys who turned things around — they knew it would be a big emotional moment. They clearly wanted to be the first to show her some awards love in a way that would result in headlines and goose the Academy members who haven’t yet voted to follow suit.