With Basic Instinct 2 arriving this Friday, here’s an amusing piece about unwanted sequels by L.A. Daily News critic Glenn Whipp. One of the the misbegotten is Oliver’s Story, a 1978 sequel to Love Story. I remember this film’s poster fondly, or rather a dialogue- added variation. I saw it on a New York subway station wall just after the film opened in December ’78. The graffiti dialogue made me laugh, and I’ve told people about it for years and they’ve laughed, so I’ll try it out on the readership. This isn’t a family column, but I’m going to use polite language anyway because it won’t be very funny if I use the original terminology. Consider the image on the poster and that famous “love means never having to say you’re sorry” line from Love Story. The dialogue balloons had O’Neal saying to costar Candice Bergen, “I’m sorry but since we’re already in this position may I have sex with you in a way that’s guaranteed not to get you pregnant?” Bergen answered, “I’d prefer another method of sexual congress that’s just as much of an assurance in that regard.” 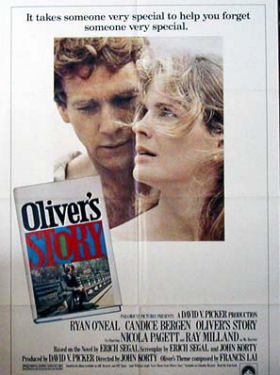