“Without A Killing There Is No Feast”

De-ball, soften, sand it down. Last April Sony Classics, director Roman Polanski and producer Said Ben Said decided to remove “God of” and just call their film Carnage. Now the Sony Classics marketing team has apparently decided that selling Polanski’s (and playwright Yasmina Reza‘s) dark comedy (opening on 12.16) as a chaotic or discordant experience will be bad for business. Could they have presented this film in blander terms? They’re clearly trying to soothe prospective viewers, but to what end? 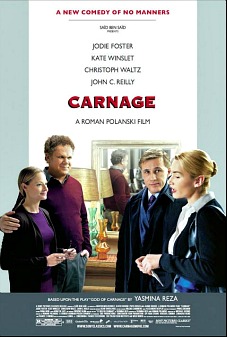 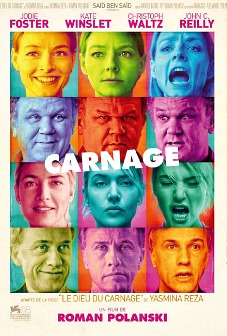 It seems to me that this poster argues with everything that Reza’s play — a piece about the thin line between good manners and animal aggression — ever was or hoped to be.

“As Freud tells us in ‘Civilization and Its Discontents,’ we have to repress our infantile aggression in order for civilization to survive,” New Yorker critic John Lahr wrote in March 2009. “But it’s worth paying top dollar to see those feelings acted out by an expert ensemble. And no bleating about the cruelty of farce, please. As [playwright Yasmina] Reza knows and so gleefully shows, without a killing there is no feast. ”

That’s precisely what this poster does. In a roundabout way it bleats about the cruelty of farce by suggesting that the film contains no cruelty or farce or ferocious jungle behavior whatsoever.

Six weeks ago I called Carnage “wonderfully tight and concise, and acted to perfection…not just a film about bile and self-loathing and lacerating words and puke, [but] about artful chiseling and razor-sharp precision…beautifully timed and cut (congrats to Herve de Luze), exquisitely framed within a widescreen aspect ratio…and no jiggly hand-held shots! Everything shot is captured from a tripod or a super-smooth steadycam.”