I first saw Dances With Wolves just after it opened on November 9, 1990, but that was my last looksee until two or three days ago when I happened to see a crappy pan-and-scan version on cable. I never saw it on laser disc in the ’90s and never caught the 227-minute director’s cut that came out in ’04 or whenever. One reason, I suppose, is that I’ve always resented Dances With Wolves for taking the 1990 Best Picture Oscar from Martin Scorsese‘s Goodfellas, which of course was and is a far better film. 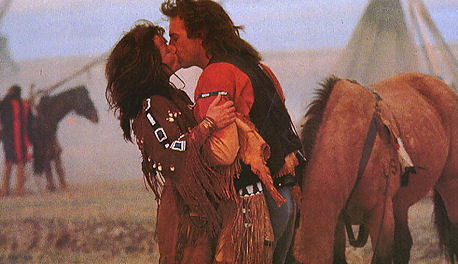 I only saw the last 100 minutes — the part in which Kevin Costner‘s Dunbar is captured by U.S. Cavalry troops and held for the capital crime of treason for consorting with Native Americans, and the subsequent attack on these troops by the Pawnee and Costner getting back with Mary McDonnell, etc. But I have to say this film hasn’t aged well. It’s so labored and unsubtle. The guys playing the troops act in the broadest manner, leering and scowling like unshaven degenerate pigs. Over and over Costner-the-director says to the audience, “See how cruel and reprehensible the white soldiers are? And see how pure and noble and big of heart the Pawnee are? Do you see how there’s no contest as to which is the morally superior culture?”

After it was over I said to myself, “Whew.”