“Like the 1961 Richard Yates novel it is faithfully adapted from, Revolutionary Road might make you cry,” writes the N.Y. Observer‘s Sara Vilkomerson. “It could very well make you mad. But perhaps most unsettling of all — particularly in this, our new Age of Anxiety, with layoffs and money troubles and the ever-increasing pressure, especially in New York City, to have everything, in spite of it all — it might force you to examine your own life. 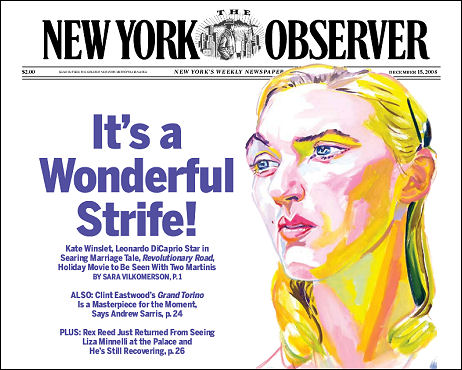 Sam Mendes‘ film “is, in part, a portrait of a marriage,” she explains. “But it is also a dissection of personal failure, of what happens when we disappoint ourselves, when we end up on the road we never meant to travel. As you might imagine, the view from that road, when one really stops to look, is very bleak indeed.

“Leonardo DiCaprio and Kate Winslet play Frank and April Wheeler, a young couple who seems to have it all: genetically blessed looks, charm, adorable children, a sweet, green-lawned house within commuting distance from the city. They’re the shining stars of their block, the enchanting and interesting couple everyone wants to have a drink (or four) with.

“Unlike the sad sacks in his office, Frank is cut out for bigger and better things, and April is the woman meant to be married to someone like Frank — she’s the unintentional housewife who is different, more intelligent and introspective than the other women planting greenery along their identical drives. Or so the Wheelers liked to think. Thanks to events both in and out of their control, they must confront the people they have actually become out in suburbia, and the cold reality that they will never lead the lives they intended to. And then they begin to disintegrate. Spectacularly.

“‘I think it’s perfectly possible for human beings to spend a large part of their life convincing themselves that they’re happy,” Winslet said recently, speculating on why it is that Revolutionary Road will resonate with people so deeply. She was perched on a sofa in the Waldorf Astoria, smoking hand-rolled cigarettes and ashing elegantly into a bottle of water.