The 35th anniversary of the release of Martin Scorsese‘s Taxi Driver happened on February 8, 2011 since it opened on 2.8.76. The 2011 Berlin Film Festival screened a 4K restored version days after the anniversary. The excellent Bluray came out on April 5, 2011. And a beautiful pristine print showed two and a half months ago at the TCM Classic Movie Festival.

So why am I attending a 35th anniversary screening of Taxi Driver at Sony’s Colorworks facility this evening? Because I believe that it might look just a little bit better when screened at this studio-funded, top-of-the-line facility — just a tiny bit. And so I can say to myself for the rest of my life, “I’ve seen Taxi Driver on a theatre-sized screen at a very high-quality post-production house, or probably the best place to see it anywhere, ever.” So that’s why. Plus I want to get out and I have nothing else to do tonight. 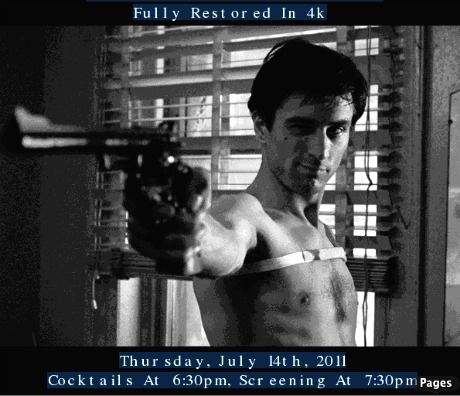