You Can Be Sure

Howard Deutch is by all accounts a very bright, likable and dependable fellow. But the words “directed by” above his name on a movie poster is not a good thing for people like myself. It’s an assurance, I’ve learned over the years, of a kind of middlebrow hacksmanship that always results in a feeling of being faintly drugged while watching one of his films. It also tends to lead to leaning forward in your seat, to placing your head in your hands and spreading your fingers apart and over your eyes, and to mild groaning and bathroom breaks. 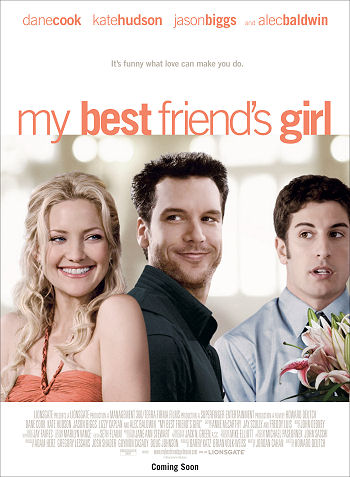 On top of which I’ve had nothing but bad or underwhelming times with Dane Cook — the man is an animal, a three-toed sloth — and Kate Hudson has proven beyond a doubt that she has no taste in movies whatsover, Almost Famous being her one lucky fluke. I liked Jason Biggs in Woody Allen‘s Anything Else so I’d rather not bash at this point in time.
But of course, My Best Friend’s Girl (Lionsgate, 9.19) is aimed at the under-30 girlies who know zip about movies, who have nothing in the way of cultivated taste about anything except what kind of makeup to use, who don’t read reviews or online columns like this one, and who shriek and convulse with laughter when they get together in groups of three or four at Starbucks or Coffee Bean or Seattle’s Best.