A couple of days ago Josh Dickey, a respected entertainment and social media realm editor (Mashable, TheWrap, Variety) and veteran journalistic presence around town, announced on Facebook that he’s embarked on a new career path.

Dickey is now specializing in HVAC/R engineering, or the installment and maintenance of heating, ventilation, air conditioning and refrigeration.

Why is he out of the Hollywood racket? The impression I’m getting is that he’s the wrong color and the wrong age, and is assessing the world in the wrong way. It would appear (and I’m stressing the “a” word) that no matter how smart and highly credentialed they might be, straight, middle-aged white guys aren’t being hired much these days. Especially if the white guy in question is more of a discerning, Bari Weiss-leaning centrist or libertarian than a wokester.

The Khmer Rouge wants to more or less eliminate guys like this, or at least seriously thin their ranks. And if you complain you’ll be laughed out of the room and probably end up in an even worse spot for your trouble.

Here’s how Dickey put it: “Everything you hear about media bias is ten times worse when looking out from the inside, [and] the homogeny of the industry’s worldview had become hostile to my center, libertarian, rugged individualist leanings, a dissonance that was manifesting everywhere I went. ‘They’ wanted me to write about social justice [while] I prefer to seek truth, and so something had to give.** 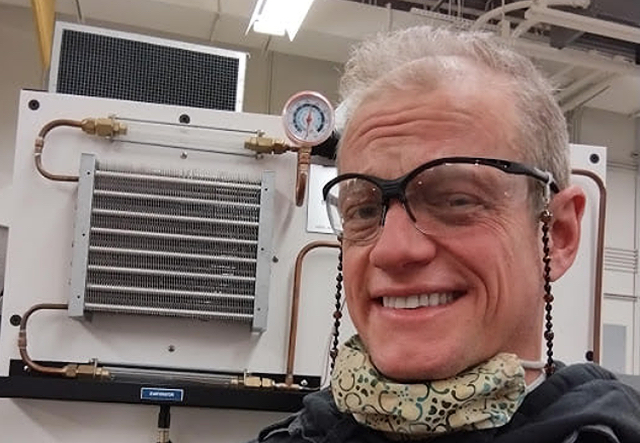 “Not that the media, spattering grease fire that it has become, would have me. I’m not the right make, model and year anymore. That’s not something I’m whining about — it’s just a stone fact. Ten years ago I was beating back recruiters. My resume is a garden of journalistic delights and editorial accomplishments, and I’ll always be proud of those.

But during the past couple of years, I have applied for more than 100 media jobs — roles I was uniquely qualified for — and not a single interview or lead has come of it. I mean crickets, folks. Because, let’s face it, HR won’t look past my LinkedIn profile picture. Not in this climate.”

A year or so ago I passed along an anecdote from an east-coast critic friend who said that a job-seeking colleague had been told point blank by Variety critic Peter Debruge that as far as critic stringer postions are concerened, Variety is looking to only (or primarily) hire women and POCs. When I shared this anecdote with a journo colleague his response was “I don’t know that I trust that story” or “that doesn’t sound like Debruge” or words to that effect.

Today I was told that a rep for another entertainment-industry publication had explicitly stated in an email that their unspoken hiring policy is focused more or less entirely upon women and POCS. Because if it got around that this publication isn’t dedicated to hiring these two categories of job applicants or aren’t giving them full and fair consideration, they’d be DEAD in the Twitter water.

And white guys can’t beef about this because they’ll sound wimpy and whiny and…well, lacking a sense of irony. They’d sound ungracious and entitled. The applicable phrase is “a taste of your own medicine, fuckface.”

Khmer Rouge cadres to middle-aged white guy job applicants: “For decades you and your buddies (not to mention your fathers and grandfathers) were at the front of the line…now you’re at the back of it. It’s that simple And if you don’t like it, tough. You’ll take it and like it.”

So combine (a) the earlier, second-hand Debruge anecdote (however accurate it may or may not be) with (b) Dickey’s statement and (c) what I’ve been told about the hiring philosophy at a certain publication, and you’ve got three blades of grass…three blades that suggest there’s a whole lawn’s worth of attitudes out there…attitudes that basically say “older white guys can suck on it.”

We all want a fair and equal playing field when it comes to hiring, but we now seem to be in a phase in which straight white guys appear to have taken on the status of targeted must-to-avoids — actively discriminated against because they’re not black or female. Or are simply too “straight” or aren’t, you know, gay enough. Or because vaguely centrist or conservative-minded fellows just don’t fit in these days. Or some combination of the above.

As Henry Hill said in Act Three of Goodfellas, “These are the bad times.”

There’s no place for White Guys With Opinions anymore. Unless you’re someone like myself, I suppose, but don’t think things aren’t tough in my corner as well. I’ve been grappling with punitive Khmer Rouge backhands and freeze-outs for a solid three years and counting.

There are certain outfits in the industry that aren’t even trying to hide this bias. If (and I say “if”) someone were to present an email from an entertainment or media-related company that said in so many words that they’re only interested in hiring women and POCs these days, a guy could theoretically hire a labor lawyer and sue. Expressly not even considering hiring a job applicant due to gender and/or skin color…that’s about as litigious as it gets.

But white guys can’t do this because people would say “how dare you? You and your kind swaggered around for decades, and now that the tables are turning you’re upset? Man up, you fucking child. Take a course in sensitivity training, read Robin D’Angelo‘s ‘White Fragility’ and shove it up your ass…you’ve had your day and now it’s time for guys like yourself to step aside and wait your turn.”