Young @ Heart (Fox Searchlight, 4.9) opens three days from now. I’ve seen it twice since catching it at last summer’s L.A. Film Festival (for a total of three sits), and I could see it another couple of times, no sweat. It so far the year’s most emotionally affecting film, hands down. Easily. And it manages this without resorting to anything treacly or mawkish or calculated. 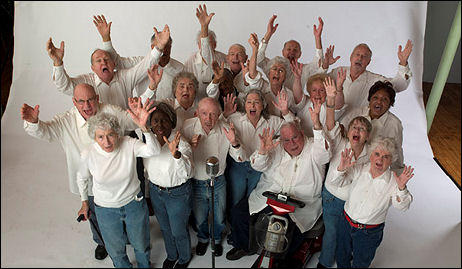 You might have heard Young @ Heart is some kind of family film or an old person’s musical, or something for people with aging parents. What it is is a movie about a bunch of old coots determined to sing and perform and affirm their vitality until it’s gone or taken away from them. It’s about living your ass off while you still have a life to live. Like most of us are doing right now…right? (Except for certain arrogant teens, druggies and whatnot.)
The characters are the Young@Heart Chorus from Northhampton, Massachusetts — all retired and then some, from 73 to 90-something years old, singing classic ’70s and ’80s rock tunes for paying audiences, touring here and there (including Europe) and having a spirited and moving time of it.
There’s something about the way these old guys sing songs by Bob Dylan, the Clash, David Bowie, James Brown, Jimi Hendrix, etc. that gives the lyrics added humanity and poignance. The height of this effect comes when the group does a performance in front of state prison inmates a day after a group member has passed. The group sings Dylan’s “Forever Young” much more movingly, trust me, than Dylan himself has ever managed.

After my last viewing I spoke to a journalist friend who found it “a little sad” because it’s about characters who don’t have a lot of time left. “Neither do we,” I replied. “Do you have some contractual guarantee in your filing cabinet at home that says you’ll definitely be alive next week?”
The fact that it aired on British TV in ’06 has apparently disqualified it from contending for the ’08 Best Feature Doc Oscar, but who cares? There’s nothing that radical about this film, really, except for the fact that it works. It kicks in. It will probably make you question whether you’re living your life to the fullest or not, or at least re-sell you on the idea keeping your heart and spirit open.
Here‘s what I wrote about it last summer. I was actually told not to review it at the time by publicist Mickey Cottrell. So I ran this little thing which amounted to an introduction to an excerpt of a review by Variety‘s John Anderson. Then other stuff happened and I forgot about Cottrell’s deadline and here we are, nine months later. 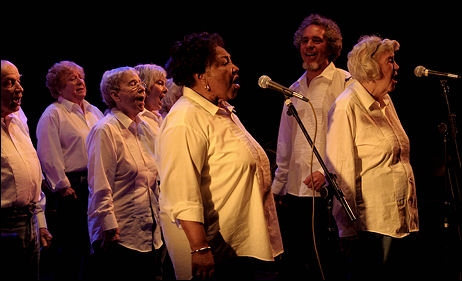 I managed to call it “the reigning heart movie of the LA. Film Festival (and in both senses of the term, delivering both warmth and sadness) and will be a guaranteed winner when it goes out commercially.” Some people are calling it “funny,” which it is at times. Chuckly-funny. Grandparent-funny. But it’s a lie to say it’s about a bunch of laughing octogenarians having the time of their lives.
The most infectious parts are the two music videos (which were directed by the film’s producer, Sally George). It’s “funny,” yes, to watch the group perform the Ramones’ “I Wanna Be Sedated” and the Talking Heads’ “Road to Nowhere'” but you can’t help but reflect on the echoes. As fate would have it, two members die a week or so before the big show at the finale.
The Young @ Heart director is a 53 year-old guy named Bob Cilian, who, like all visionaries, can be demanding. One of the oldsters calls him a “taskmaster.” But he does make it hard on the gang by choosing pretty difficult tunes. Rehearsing the Pointer Sisters’ “Yes We Can Can” (which requires the singing of 60 or 70 ‘cans’) drives everyone nuts. There are also problems when an 80-something gent has difficulty with Brown’s “I Feel Good.” Why doesn’t Cilian have them do Neil Young‘s “Only Love Can Break Your Heart” or “Old Man”? Or…I don’t know, Roy Hamilton‘s “Don’t Let Go”?