Zapata For A Day

Since Elia Kazan‘s Viva Zapata still isn’t out on DVD (and apparently won’t be any time soon, according to a guy I recently spoke to who seemed to know a few things), it’s a priority for me to see it at the Film Forum on Monday, 10.19, as part of a three-week Kazan series. 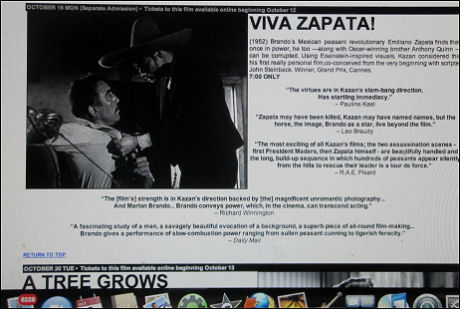 The effete snooties have been putting this film down for years, calling it a sentimentalized, white-liberal view of the Mexican revolution. And the fact that John McCain has called it his favorite film can’t be interpreted as a good thing. But the craft, heart and political conviction in Viva Zapata still feel genuine to me. Kazan was coming to terms with ratting (i.e., confirming names) when he made it, but he was still an old leftie from the ’30s and knew about the emotion behind a rebellion.

Zapata is one of Brando’s three golden-era Kazan collaborations, two years before Waterfront and a year after Streetcar. And he’s truly great in the lead role. Ditto Anthony Quinn and Joseph Wiseman in theirs. (I’ve always loved how Wiseman, playing a manic political agitator type, shouts in a crazy manic stream, “Zapata, in thenameofeverythingwefoughtfor don’t go!”) And Brando’s death scene near the finale (i.e., getting shot 112 times) is a classic of its kind.