One reason I’ve been slow to post today is that I’m scanning old articles for the “Yellowing With Antiquity” section that will be viewable on the newly designed Hollywood Elsewhere, which will hopefully be live by the end of the weekend. In any event, I just scanned my only surviving copy of a 1992 Movieline piece I wrote called “Ten Interviews That Shook Hollywood” and realized to my horror that I’m missing the final two jump pages. 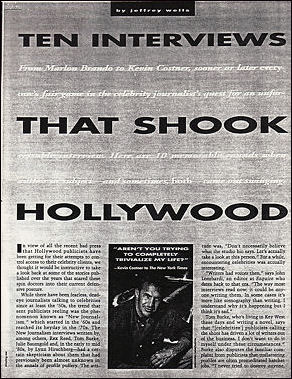 In the unlikely event that some packrat out there has old Movieline issues sitting in their garage, please get in touch. The issue that contained this article had David Bowie on the cover.
The piece offered summaries of the juiciest celebrity interviews I could find back then. The copy I just scanned features five — Truman Capote vs. Marlon Brando (“The Duke in His Domain,” The New Yorker, November 1957), Rex Reed vs. Warren Beatty (“Will The Real Warren Beatty Please Shut Up?,” Esquire, October 1967), Robin Green vs. Dennis Hopper (“Confessions of a Lesbian Chick,” Rolling Stone, May 1971), Tom Burke vs. Ryan O’Neal (“The Shiek of Malibu,” Esquire, September 1973), and Julie Baumgold vs. David Geffen (“The Winning of Cher,” Esquire, February 1975).
Here’s the cover page, page 2, page 3, and page 4.
The opening graph reads, “In view of all the recent bad press Hollywood publicists have been getting for their attempts to control access to celebrity clients, we thought it would be instructive to take a look back at some of the stories published over the years that scared these spin doctors into their current defensive posture.”