This is a
totally excellent trailer
for Paul Greengrass‘s Flight 93 (Universal, 4.28)…you know, the 9/11 movie about the plane that went down in the Pennsylvania countryside because a few brave passengers stood up and did the hard thing. But what’s with the image on the one-sheet [see below]? Flight # 93 was nowhere near Manhattan after the towers got hit, but Universal’s ad guys…well, as the saying goes, “Leave it to the ad guys!” They obviously decided the folks wouldn’t get it unless the burning towers were front-and-center. Talk about clever, creative, Cleo-Award work. 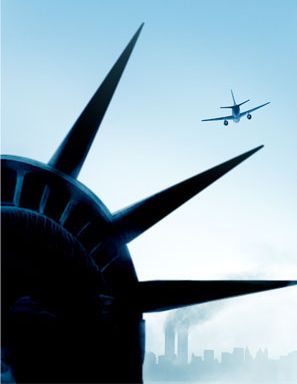 Randy Quaid acted in Brokeback Mountain for peanuts, so you can understand why he’s pissed that he did that, given that the movie has taken in $160 million worldwide. He’s figuring that a portion of the dough ought to be passed around as a retroactive make-up thing. And yet it seems a mite strange that Quaid is suing Focus Features, Del Mar Prods., and Brokeback producers James Schamus and David Linde for $10 million on complaints of “intentional misrepresentation, “negligent misrepresentation” and “recisssion.” (The last term apparently refers to someone having “rescinded” or gone back on a deal point.) I don’t know about this stuff, but shouldn’t Quaid’s agent have stipulated in his contract that if the film turns into a surprise hit and makes, say, over $30 million that Quaid automatically gets paid this amount retroactively, and if it earns over $50 million he gets paid that amount retroactively, and so on? A studio-based person who knows something about contracts and indie-world financing has theorized that Quaid’s agent might have been rebuffed upon trying to even discuss putting such terms in the contract because “of Quaid’s standing…because he’s not big enough…if it had been Matt Dillon [Focus] might have said we’ll give you a bump after the film makes certain earnings,” but they may not have let Quaid’s agent even begin that conversation. Is it really “career suicide” for Quaid to do this, as a certain columnist has suggested? “Kind of,” the studio source said. It’s a rough world out there.

When he recently interviewed former pinup queen Bettie Page, whose life during the 1940s and ’50s is the focus of Mary Harron‘s The Notorious Bettie Page (Picturehouse, 4.14), L.A. Times staffer Louis Sahagun wrote that that “her face remains smooth and fresh, and one can still see the face of the young woman in the old. Her eyes, bright blue, still sparkle.” That’s good to hear because judging by Paige’s reported criticism of the film, she’s not that hip. After seeing the film at the Playboy Mansion in Los Angeles a few weeks ago, Page reportedly complained about the title. “Notorious? That’s not flattering at all,” she said. “They should have used another word.” The film’s producer Pam Koffler later told Sahagun that, of course, the title “was meant ironically…Bettie Page gained such notoriety for her modeling, but the real person and her life were exactly opposite of all that.” On top of this the New York Post‘s “Page Six” column reports that the 82 year-old Page was “overheard loudly snorting and sighing” during the Playboy Mansion screening. It’s probably a rule of thumb that most older people (especially the over-70 types) aren’t very comfortable recalling or re-living aspects of their foolish youth. Nobody likes to thinks about past mistakes, time wasted, opportunities missed, etc.

What’s the worst DVD commentary track ever recorded? Obviously a subjective call, but Rate That Commentary hands the booby prize to the usually very well-spoken William Friedkin and his commentary on Warner Home Video’s The Exorcist: The Version You’ve Never Seen, which came out in June 2004. Odd…Friedkin is usually very good on the mike. “A slow and uninformative comentary…one of the worst,” “the worst…non-informative and boring…the director is clearly uninspired [and] just describes the events we can see for ourselves. Actually, he also spends a lot of time in silence,” and”I don’t understand why this is the worst commentary ever! Was Friedkin forced into doing it? His commentaries for French Connection and Exorcist (original version) are excellent. Avoid this at all costs, unless you need a cure for insomnia.” I mention this only because Rate That Commentary is worthy scanning from time to time.

The coolest thing about John Anderson and Laura Kim‘s new how-to-sell-your-independent-movie book, “I Wake Up Screening“ (Billboard, 3.30), is, of course, the title…although it sounds more like a description of what it’s like to attend Sundance or Cannes or Toronto as a buyer or a journalist than anything else. It’s a how-to manual for emerging filmmakers “about how to (and how not to) get their films talked about, written about”…uhhm, the best way to do this is to get people like me to see it early. Anderson and Kim also “explain how to get their films evaluated, how to put together the perfect team, how to deal with the media” — flattery, early access, invitations to parties — “how to navigate the festival circuit, and how to win friends and influence people,” the press release says. Anderson is an L.A.-based critic who writes for Newsday, Variety and the New York Times, and Kim is a marketing vp at Warner Independent Pictures.

That server shutdown that happened around 10:30 am and lasted about fifteen minutes was one of those unfortunate incidents. Lunar Pages has offered their apologies, and I, too, am offering mine.

A little more than three years ago Variety‘s Michael Fleming reported that former bigtime auteur Lawrence Kasdan (Grand Canyon, The Big Chill, et. al.) was starting work (along with screenwriter Terri Minsky) on a U.S. remake of Sandra Nettlebeck‘s Mostly Martha for Castle Rock. There was moderate excitement about this since pretty much everyone with any taste was fairly taken with the ’01 German-made original. In June 2002, back in my Reel.com period, I ran a rave about Martha, calling it “a culinary Kramer vs. Kramer” about a female Hamburg chef with selfish tendencies (movingly played by Martina Gedeck) having to take care of her recently deceased sister’s young daughter — I also called it “the most succulent, sensually appetizing, food-trip movie since Big Night or even Babette’s Feast .” But Kasdan and Minsky, who wanted to set their film is some foodie city like New Orleans or San Francisco, ran into difficulty (I don’t know what kind) and their movie never happened. In May ’04, however, a moderately painful, obviously Martha-inspired confection called Raising Helen, directed by Garry Marshall and starring Kate Hudson and John Corbett, was released by Disney and wound up earning just under $40 million domestically. It had the same set-up (sister dies in car crash, selfish single professional woman suddenly has to take care of her kids, etc.) although Hudson’s Helen wasn’t a chef — she worked at a modelling agency. I thought that was the end of that saga, but no….there’s a second Mostly Martha knockoff currently rolling in Manhattan’s West Village, and this one is a little closer to the bone since it’s a resuscitation of the Castle Rock-Kasdan project. It’s being directed by Shine‘s Scott Hicks and stars the uber-capitalist, T-Mobile-hawking Catherine Zeta-Jones as the selfishly-inclined lead character (who this time is back to being a chef). The script is by Carol Fuchs, the boyfriend is being played by Aaron Eckhardt and the little orphaned girl is being played by Little Miss Sunshine‘s Abigail Breslin. CZJ’s character is called Martha but the IMDB is calling the movie an “Untitled Scott Hicks Film.” The IMDB chat boards about this film are hilarious — these are hardcore types, of course, but they all loved the original and despise the idea of a remake, they loathe CZJ and they all hope that it flops. I personally think it’s fine — Hicks is a pretty good director (putting aside the issue of Snow Falling on Cedars) and although the sweet European tone of Gettlebeck’s original Martha will almost certainly be lost, this Warner Bros. release may turn out okay. It’s just too bad that Kasdan’s version never happened (the IMDB says his next project is a Tom Hanks father-son relationship piece called The Risk Pool). And I think it’s unfortunate that the Gary Marshall-Kate Hudson version was made in the first place since it probably half-poisoned the well in terms of future audience interest. A fairly sizable crowd saw it, after all, and it’s probably safe to assume some of them will go, “Hey, isn’t this the same old thing?” when they start hearing about the Hicks version.