“Sharon Waxman‘s piece about the end of Used Guys is good, but there may be another reason for its demise: Jim Carrey has gone flakey, to put it mildly. He’s been telling everyone who will listen, journalists included, how he’s tired of doing the madcap comedy that made him wealthy. More alarmingly, he’s been babbling about his fascination with the number 23 — he’s actually making a movie by that name — and how he thinks it connects with everything in the world. Maybe he’s on to something, but maybe he’s become just a little too wingy for studios to roll the dice on. Especially since Fun With Dick and Jane did okay but not spectacular numbers.” — Journo pal

So it turned out that two youngest American filmmakers with films in competition here — Southland Tales‘s Richard Kelly, 31, and Marie-Antoinette‘s Sofia Coppola, 35 — got slammed the hardest. Had to hurt. For what it’s worth, the Southland Tales team said they were on schedule to finish the film in mid-June, and when they heard they’d been accepted (they expected to show it out of competition, at best) it was general quarters, no notes handed to Kelly, not enough money to finish some of the things they had to finish and rush-rush-rush. I’m certain there will be another big critics’ viewing down the road (maybe in Toronto) and by that time some of the length and clarity issues will, I presume, be resolved.

Back on the blue wi-fi couch on the outdoor press balcony, and I’ve seen Guillermo del Toro‘s Pan’s Labyrinth. But I can’t enthuse about it online until after the official press screening on Saturday. If I don’t hold off a couple of U.S. publicist pals will be sent to the guillotine…mais non!

The Palme D’Or never means much in terms of U.S. box-office, but at least bestows a stamp of esteem amogn critics. The winner, as everyone has acknwoledged, will be either Alejandro Gonzalez Innaritu ‘s Babel or Pedro Almodovar‘s Volver. I’m a Babel guy but there’ll be no fretting whichever way it goes. Pedro’s film is about women, warmth and family, but it disappointed me a bit when it gave up the ghost, so to speak. Alejandro’s is also about family (in a more strained and anguished sense), but it’s a fuller, more complex and penetrating work. Both are superbly made.

I’m sitting in the outdoor balcony area adjacent to the press room, and there’s a wonderful cool breeze coming off the bay. The air smells fresh and vaguely salty, the sky is the clearest blue and flecked with little white cloud puffs. It’s amazing what good weather and a little rest can do for your outlook…for everyone’s. It’s 11:25 am, and I’m off to see Pan’s Labyrinth. 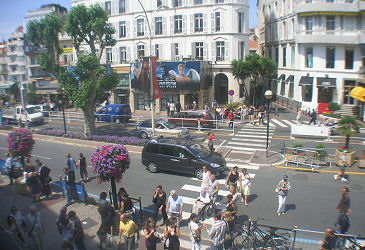 And: (a) Lying duo Molly Hassell and M. Blash aboard the Big Eagle cocktail party for their film — Tuesday, 5.23, 5:55 pm; (b) Shortbus guys Paul Dawson and PJ DeBoy (or is it the other way around?…sorry) at Tuesday’s Lying party; given my sentiments about the film, I didn’t feel quite right about attending Wednesday night’s Marie-Antoinette party…something of a spot decision; (c) Just before a tour bus nearly ran me down — Wednesday, 5.24.06, 7:55 am; (d) Hotel Splendid.

“I understand why some might not like Marie-Antoinette, but the idea of people actually booing it is the most hilariously hypocritical thing I’ve heard at Cannes this year. At least half the competition films that I’ve seen, many of them French, have been dull, turgid and labored. Obviously
Marie-Antoinette doesn’t invite emotional responses as strongly as Lost In Translation did, but Coppola seems to be being criticized for what she hasn’t made, as opposed to recognizing what she has. I think it’s a mistake, if not grossly unfair, of you to somehow paint the film as a failure just because of the overblown reactions of a few pompous Euro crits. The only reaction I heard at my screening was a couple of middle-aged women, one of whom remarked to the other ‘Tres, tres bon’, reflecting my response as well.” — Distribution pal who always asks for anonymity. Wells response: It’s fair to report the boos. They were loud and prolonged, and they expressed my own feelings as well as many, many other press people I spoke to afterwards. As I said yesterday, the theme, craft and tonal consistency in Marie-Antoinette qualify it as a well-made film, but the bland thoughtlessness that lies at the center of it — the complete shucking of the elements that give her story resonance — is rancid. And boooo! to that.

“I don’t know if you’d heard reports of this, but prior to last night’s preview screening for X-Men 3 there was a trailer for Snakes on a Plane and the audience went BALLISTIC! You could tell they were hip to it cause the cheering started as soon as the single word “Snakes” went up, and just thundered all throughout the fairly short teaser, which featured a few fleeting glimpses of snakes, passengers in jeopardy, and Sammy J. I think the idea that SOAP fever is dying down is bollocks. This thing is just getting warmed up.” — Max Evry, Washington, D.C.

I have this idea that Sharon Waxman‘s N.Y. Times story about 20th Century Fox execs pulling the plug on Used Guys, the Jim Carrey-Ben Stiller-Jay Roach comedy, isn’t just well reported. It’s also, I suspect, a sign of the times, a turn in the road…a shot heard round the Hollywood world. The $112 million budget meant that Used Guys would “be one of the most expensive original comedies ever made,” Waxman writes. “And in an industry with crushing marketing costs and top-shelf stars taking a huge chunk of every ticket sale, the studio decided the math didn’t add up.” Bottom-line indicator: Carrey, Stiller, Roach (the director) and other top-dollar players are going to have to start adapting to a world in which they’ll have to settle for being very well paid for their talent and name value, instead of being paid fantabulously-orgasmically. Get used to it, hombres.