A friend tells me Exhibitor Relations isn’t listing Red Sun, Black Sand, Clint Eastwood‘s Japanese-language war film lensed last spring as a companion piece to Flags of Our Fathers (Paramount/ DreamWorks, 10.20), as a December release. (They always wait for an official announcement.) Coming Soon.net isn’t listing it on its December release page either, and Rotten Tomatoes isn’t even acknowledging that Black Sand is a film Eastwood has directed. And there isn’t a damn thing about it on both the Paramount and DreamWorks websites. 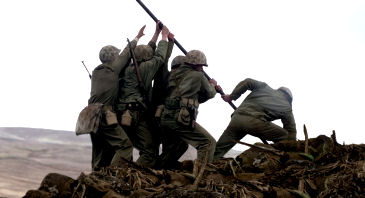 And yet the IMDB is running a presumed release date of December 2006, and this column is heavily dug into a belief that Red Sun, Black Sand (which stars Ken Watanebe as General Tadamichi Kuribayashi) will indeed open in December. How can it not? Two movies made in tandem by the same fast-working director about the battle of Iwo Jima — one about the Americans, one about the Japanese…and Paramount/DreamWorks is going to release only the American version on 10.20? Okay, it’s possible…but does anyone believe it’s at all likely?
I wouldn’t think Paramount’s Oscar consultants and marketers would stand for a separate ’07 release for Black Sand. (They’ll at least insist on a year-end platform debut.) They know that a sequential double-whammy in the same year will make a Best Picture nomination for one of the two Eastwood films all but guaranteed. I mean, unless they both put people to sleep.
Apologies for yesterday morning’s box-office typo — the projected Pirates 2 weekend total should have been $58,317,000 — not $50,317.00. This morning’s projected Pirates 2 figure for the weekend is $60,598,000, with a slightly higher overall cume of $255 million. Little Man will continue to edge out You, Me and Dupree with respective hauls of $21,910,000 and $21,338,000. Poor Superman Returns is now likely to finish at $10,881,000 (just over $750,000 higher than yesterday’s projected total of $10,058,000) with a slightly revised overall tally close to $163,000,000. The Devil Wears Prada‘s new projected weekend total is about $50 grand shy of $10 million — $9,947,000 — or about $420,000 higher than yesterday’s projected tally of $9,526,000.

A well-deserved N.Y. Times piece about Little Miss Sunshine directors Valerie Faris and Jonathan Dayton, who are very married, very talented and who finish each other’s sentences.
There’s just this one tiny odd note in Franz Lidz‘s piece that I’m sure Dayton is regretting to some extent already. It comes when Dayton refers to a former roommate named Frank H. Sprague, “a perpetual 30 year-old college student [whose] extended academic career had spanned 22 years…[and] was one of those people who really did what you’re supposed to do in life but never reaped any of the benefits,” inside whom “there was a whole universe hidden.” Sprague ended up dead a few years ago “in a derelict Hollywood studio apartment,” Lidz reports. And then right after this sentence he quotes Dayton as saying Sprague “died in his underwear clutching a Hershey bar.”
Whoa. No matter how much of a loser or a dilletante Sprague might have been, it’s disrespectful to dismiss him that way. The use of the words “clutching a Hershey bar” doesn’t feel right.

Given the imaginative, heavily visual, time-trippy story and all, you’d think that Darren Aronofsky‘s The Fountain (Warner Bros., 10.13) would be receiving some kind of promotion with the fans at Comic Con next weekend. Here, in any event, is the poster by the way of joblow.com. 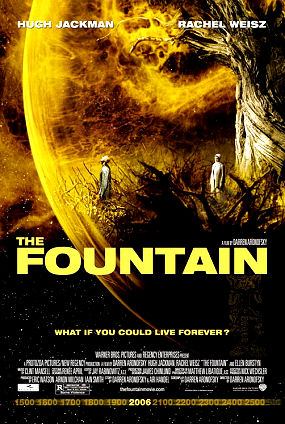 “At the end of the day I can only do what I can do,” Clerks 2 director-writer Kevin Smith says to L.A. Times writer Mark Olsen in a 7.16 piece. “You read a lot of reviews where people say, ‘You should stretch. He should learn to stretch as a filmmaker.’ After a dozen years now, don’t they get it? This is what I do, this is the storyteller I am.
“Do I let myself off the hook by saying, ‘I’m just not that talented?’ Probably. But also I think it’s important to know your limitations. I’ve kind of embraced mine. And I’ve had seven films’ worth of practice to figure that out.”
I don’t entirely believe this. The reason Smith is great on the college-lecture cricuit is that he’s excellent at au contraire-ing — arguing, debating, puncturing balloons. And to me that means he could write a really superb play about a GenX marriage gone bad — a latter-day “Who’s Afraid of Virginia Woolf with a little 2006 “My Dinner with Andre” thrown in. Smith is married and has gone through some trying married-couple stuff…this has to have happened. All he has to do is put it into shape. A play first, and then a low-budget film.
Smith has said he’s too content with his life and too mild-mannered go to in this direction, but as Montgomery Clift’s Pvt. Prewittt says to Burt Lancaster’s Sgt. Warden in From Here to Eternity, “A man should be what he can do.”

“We’ve had Life is Beautiful and Jakob the Liar,” a 7.12 Guardian item reads, “and now the list of movies mixing clowning with the Holocaust is to grow with Adam Resurrected, a Paul Schrader film that will adapt a book by Israeli novelist Yoram Kaniuk.” The item says “the story [is about] on a Jewish circus clown” — to be played by Jeff Goldblum — “who is kept alive by the Nazis to entertain his fellow Jews as they march to the gas chambers.” 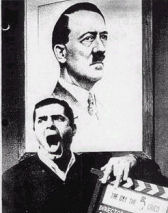 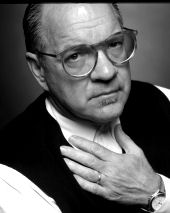 Jerry Lewis (l.) in a faked photo (I think) suggesting it was taken on the set of the unreleased The Day The Clown Cried (1972); (r.) Paul Schrader, who is reportedly looking to direct Adam Resurrected, which sounds very similar to Lewis’ film.

The 2006 Toronto Film Festival will run from 9.7 (a little more than seven weeks from now) through 9.16, and I guess I’ll be running some kind of preliminary rundown sometime around August 7th (maybe a week later). Wait…here’s something definitive: the poster looks cool. It’s all part of a gathering desire to extract my head from the summer mentality. If only Clint Eastwood ‘s Flags of our Fathers and Mel Gibson‘s Apocalypto had stuck to their August release dates….water under the bridge. 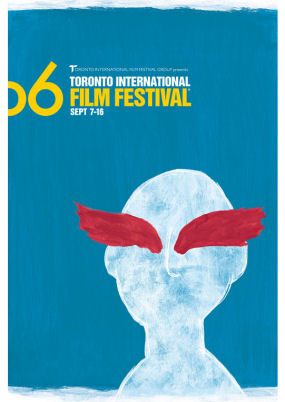 L.A. Times Envelope reporter Elizabeth Snead on Ian McKellen`s “A Knight Out in L.A.”, his live one-man show that will have two performances at the Freud Playhouse on the UCLA campus on Saturday, 7.22 and Sunday, 7.23. (Conflicting with Comic Con!) The shows will benefit the Los Angeles Young Actors’ Company. “I’m delighted to be back onstage in Los Angeles supporting the work of the Los Angeles Young Actors’ Company,” McKellen told Snead. “The show lets me revisit favorite parts, tell a few stories, and present Gandalf onstage for the very first time! My aim is that the audience enjoy themselves as much as I shall, all in aid of the best of causes.”

I love how people are expected to defend themselves after the tide has swung against a big popular tentpoler like Superman Returns (for which the Sunday 7.16 cume will be a disappointing but still-considerable $162 million). Suddenly its admirers were wrong …they blindly went along, allowed themselves to be deluded…they lacked the focus and inner constitution to resist.
What’s happening now is a little bit like the Allied forces rounding up known Nazi loyalists after Germany’s defeat and grilling them about the depth of their allegiance.
I reacted to SR the way I did because the too-long issue aside (which hit me after the second viewing, and which I wrote about) and the Kate Bosworth problem (which hit me right away and which I didn’t make that much of a deal about because…I don’t know why…in all candor I should have pointed this out more strongly), I felt lifted up by the emotion that Byran Singer put into this film, and, being a lapsed Christian, found myself responding almost involuntarily to the Christ metaphor, and especially to the IMAX-3D scenes.
(I wrote this earlier this morning, but thought I’d post it more broadly to address the Superman backlash, which I’ve been noticing a lot over the past week or so.)

One reason — perhaps the main reason — this London Daily Mail story about Brandon Routh being unhappy with his moisturizer shade is getting attention is because the tide has turned on Superman Returns and it’s been dismissed as a failure. If SR was going gangbusters at the box-office…I’ve said it. But that said, it’s not cool for new-to-the-scene actor to be identified as the guy who ripped into his assistants for giving him the wrong shade of moisturizer. Look at him here…he’s fine. 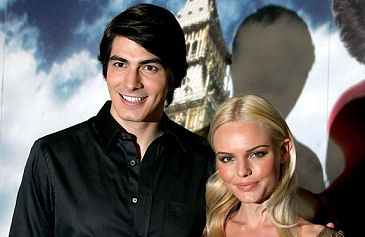 Owen “let’s forget about Dupree” Wilson, Jon Stewart, YouTube and this tit-for-tat: Stewart: “How high are you right now?” OW: “Well, I did just go on a jog in Central Park and I’m feeling a kind of runner’s high, so you’re probably picking up on that.”