The thinking is that Tom Tykwer‘s Perfume (Paramount, 12.27) isn’t going to do as well in the U.S. as it has so far in Europe. But it could turn into a goofy-kicky theatrical event if ..if…the Paramount distribution people were crazy enough (and trust me, they’re not) to invest in a special revival of an upgraded Smellovision system to accompany the showing of Tykwer’s film in select big-city theatres. 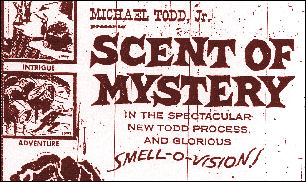 From a newspaper ad for Michael Todd‘s Scent of Mystery, directed by Jack Cardiff.

Perfume is a movie about the loveliness of scent — specifically about an oddball character who lives for the spiritual transportation he receives from very special scents, aromas and perfumes. What triggered my idea was Variety critic Derek Elley writing in his 10.4 review that “the problem with Perfume is not so much how to make the audience identify with a largely silent, olfactory-obsessed nerd who turns serial killer, but how to transmit his compulsion in the strictly audiovisual medium of film.

“More than just a killer-thriller or the tale of a man with an exceptional gift,” Elley continues, “Perfume is a skewed love story…[about] a man who suddenly discovers the ‘scent of woman’ but can’t make the jump into real relationships.

Bringing back Smellovision would be such a no-brainer goof of a gimmick I can’t believe it wasn’t at least considered for the release of this film. People are still into 3D and every so often there are revivals of 3D versions of House of Wax , Dial M for Murder and whatnot — why not bring back aroma-fortified cinema?

Smellovision and Aromarama were attempts to enhance the moviegoing experience in the late 50s. I’m guessing that if any desire existed within Paramount to bring this theatrical device back for special Perfume showings, a more effective, less cumbersome version than was used in big-city theatres in 1959 and ’60 would be within the grasp of ’06 technology.

In this Variety review of Scent of Mystery (’60), Smellovision was described as a somewhat more advanced process.

“In Smell-O-Vision, developed by the Swiss-born Hans Laube, the odors are piped via plastic tubing — a mile of tubing at Chicago’s Cinestage Theatre — to individual seats, the scents being triggered automatically by signals on the film’s soundtrack,” the review wrote. “The Aromarama smells are conveyed through the theatre’s regular air ventilating system. The Smell-O-Vision odors are more distinct and recognizable and do not appear to linger as long as those in Aromarama.”

The reason Fox will be pushing Devil Wears Prada star Meryl Streep in the Best Actress category, I suspect, is that they don’t want her up against likely Best Supporting Actress contender Jennifer Hudson in Dreamgirls (Paramount/DreamWorks, 12.15). Because she would stand a pretty good chance of losing if they did. I don’t know anything but I sense awesomeness from Hudson’s performance, based on what little I’ve seen.
Streep will probably lose in the Best Actress race anyway…no offense. She’s up against The Queen‘s Helen Mirren, who has a much richer part than Streep’s Miranda Priestley (another sort of aloof queen) and seems all but unstoppable at this stage, and Penelope Cruz’s struggling-mother performance in Volver — her absolute career best — is, I feel, deeper, stronger and more full of life than Mirren and Streep’s performances put together.

Unofficial but you can take it to the bank: Clint Eastwood‘s Letters From Iwo Jima, the Japanese soldier, Japanese-language battle- of-Iwo-Jima film, will open in early February. This is the decision from Warner Bros., which is handling the film’s U.S. distribution, and its partner DreamWorks. It’s being regarded very much as an “art film” by the powers-that-be, and may even turn up at the ’07 Sundance Film Festival. Or so I’ve been told. Oh, and Clint isn’t quite finished editing it yet, even though Warner Bros. marketing staffers saw a print a couple of weeks ago.

“Indiana Jones 4 is still in development,” George Lucas has told Variety reporter David S. Cohen. He explained that “Steve (Spielberg) and I are still working away, trying to come up with something we’re happy with. Hopefully, in a short time, we will come to an agreement . Or something.”
Indy IV — the anti-matter black-hole movie that refuses to die, that can never be satisfactorily written, that will never be made.
Lucas made this comment earlier this week following groundbreaking ceremonies for the renamed School of Cinematic Arts at USC.
He also said that — pop open the champagne! — Lucasfilm is getting out of the movie business. “We don’t want to make movies,” he told Cohen. “We’re about to get into television. As far as Lucasfilm is concerned, we’ve moved away from the feature film thing because it’s too expensive and it’s too risky. I think the secret to the future is quantity.”
Didn’t Lucas say last year that he wanted to be a indie director and make smaller, lower-budgeted features and basically be Gregg Araki, and that he was looking forward to this and felt the freedom to do this now that he’d made his billions?

New York Observer reporter Sara Vilkomerson reports that “more than a few guests dismissed Sofia Coppola‘s Marie Antoinette” at last week’s opening-night party for the N.Y. Film Festival. “It’s like sticking your hand in a giant meringue. Mark my words, no one will see it but gays and girls.”

Nicholas Hytner‘s film version of Alan Bennett‘s The History Boys (Fox Searchlight, 11.21) had its U.K. premiere three nights ago — Monday, 10.2 — before a black-tie audience and a couple of Royals (Prince Charles, the Duchess of Cornwall). And it opens in England a week from tomorrow (i.e., Friday, 10.13).
So where are the trade reviews? Any reviews?
And why is the British website calling it “a comedy by Alan Bennett”? Nobody I know who saw The History Boys on Broadway called it that, and I don’t recall any reviewers using the “c” word either. It’s obviously funny in parts — the humor is very bright and there’s a lot of laughter in the play, although more of it in the first act — but it sounds like a stretch to me to call it an actual “comedy”. If you ask me the attempt to reposition it as such is an indication of…I don’t know. But I’m getting a funny vibe.

It was reported yesterday that Harrison Ford was mistaken by Disney security guards as some kind of homeless geezer when he fell asleep in Calista Flockhart‘s car near the set of Brothers And Sisters, a family drama series she’s been shooting for Touchstone Television. (I couldn’t find out where it was shooting, but the show has a production office on the Disney lot.) The story reads that guards sent word to Flockhart (i.e., Ford’s girlfriend) that “some old guy had crawled into her car to go to sleep and that they’d called the cops to have him removed.” Who falls asleep in the backs of cars on studio lots?

The Departed is going to be the #1 film this weekend — easily over $20 million, and maybe into the mid 20s — but the general opinion is that the bulk of the under-25 audience is going to to patronize Employee of the Month and The Texas Chainsaw Massacre: The Beginning instead. They’re under the impression that The Departed is too complex, too adult, too dark-heavy, and they’d rather just have fun. Is this is a generation that truly gets what’s happening and is plugged into the current vitality or what?
It looks as if The Departed — which had a 73% general awareness, a 51% definite interest and a 25% first choice among currently-playing films in a report out this morning — is going to be the biggest opening-week earner of director Martin Scorsese‘s career. The biggest overall U.S. grossers so far are The Aviator ($102,593,534), Gangs of New York ($$77,679,638) and Cape Fear ($79,100,000).
With Dane Cook and Jessica Simpson toplining, Employee of the Month (83, 35, 12) will come in second. Figure the mid teens. Texas Chainsaw Masscare (90, 29, 14) will do between $10 and $12 million. The two biggest 10.13 openers appear to be The Grudge 2 and Barry Levinson‘s Man of the Year. Of the 10.20 openers, Flags of Our Fathers seems to be doing better than The Prestige and Marie Antoinette at this stage, but it’s a little too early to tell about that weekend.

“Apocalypto is amazing,” writes Massawyrm in another AICN posting. “Even in its unfinished form it is easily one of the best films of the year, if not the very best. Once again Mel Gibson sets out to put you in another place and time, one which at first seems totally alien √É¬¢√¢‚Äö¬¨√¢‚Ç¨≈ì only to brilliantly and quickly endear you to the people you√É¬¢√¢‚Äö¬¨√¢‚Äû¬¢re following. Within the first 20 minutes of the film you absolutely identify with the tribesman and find quite a bit in common with them. And just as you are completely comfortable and at home with them, bad shit happens. And you feel it.”
We all know Apocalypto is toast with the Academy for reasons that have zip to do with the quality of the film, but wouldnt’ it be interesting if it turned out to be as good as this guy says it is? Gibson is marketing it smartly (i.e., floating the alleged analogy between the self-destructive Mayan culture elements in the film and guys being sent to Iraq to support a policy built on lies). And it’s understood that the film hasn’t been scored and needs a bit of refining, but the next step will obviously be to show it to the press — presumably by sometime in early November.

On the heels of Tuesday’s news about Village Voice film critic Michael Atkinson being whacked, now we’re hearing that New Times management has also put a cap into Voice critic/editor Dennis Lim. And senior critic Jim Hoberman is the Last Man Standing…by a thread. And as Anthony Kaufman has written,”It’s come time to realize that for those who want a truly alternative newsweekly, throw in the towel, accept the end — the Voice is dead.”

Everything cultural runs it course, and then is no more. The Village Voice has become more and more of a rag and less and less of the formidable weekly alternative paper it used to be for a long time now. I was going to write that “presumably out of the embers of the dead Voice will come something else” but we all know that “something else” is happening worldwide, and that this means less paper and ink and more cyber this and that. The world is turning, the type of highs that came out of the film culture of the ’60s and ’70s are fading more and more, and skins are generally being shed.
The force of corporate avarice in the Lim and Atkinson firings is Village Voice Media, which came out of a merger of Village Voice Media and New Times Media. The chiefs are CEO Jim Larkin and exec editor Michael Lacey and Village Voice Digital CEO David Schneiderman. Village Voice Media owns the L.A. Weekly as well, and I’m wondering if the same kind of shit that’s now happening at the Voice is going to one day happen at the L.A. Weekly? Will Larkin, Lacey and Schneiderman be whacking venerated critics or replacing them with softballers?
We all know that there’s been pressure from the top down at publications everywhere for film critics to lighten up and be more mainstream and not be so scholarly-gnarly with reviews. Editors, naturally, want them to relate on some level with the under-25 morons who’ve never heard of mainstream/AFI auteurs like David Lean or Michelangelo Antonioni (who are far more recognizable than film-culture names like Jonas Mekas and Beth and Scott B.) and swear by moves like Jackass: Number Two.
A side issue but one that’s vitally important for independent cinema scene in Manhattan is, witha much-reduced staff, will the new Voice continue to review eachand every little film that opens there? It’s up New Media to pick up the slack and carry the banner forward.