I’ve tried and it’s impossible — there’s no feeling just one way about John Ford. His movies have been wowing and infuriating me all my life, and after seeing Peter Bogdanovich‘s Directed by John Ford — an expanded, unexpectedly touching documentary about the legendary helmer that will show twice on Turner Classic Movies Tuesday evening (and also at a special AFI Film Festival screening at the Linwood Dunn) — the muddle is still there.

But Bogdanovich’s film gives you a feeling — one that seems clear and genuine — that you’ve gotten to know the old coot better than ever before, that you’ve really and truly seen past the bluster and the scowl and the cigar, beyond the scrappy Irish machismo and into some intimate realm. After many years of saying “Ford sure made some great films but what a snappy old prick he was,” I’ve finally come to like the guy. And I feel I owe Bogdanovich a debt for that.

I tried to say this during my Monday afternoon phone chat with Bogdanovich. We spoke for 25 or 30 minutes. And I never quite said what I felt the film had taught me about Ford, which is that he was a shameless softie who used a snarly exterior manner to keep people from getting inside and discovering who he really was. But of course, his films made that pretty clear on their own.

Directed by John Ford is really and truly one of Bogdanovich’s best films. It’s right up there with The Last Picture Show, They All Laughed, Targets, Saint Jack and Paper Moon.

It reminds us once again that the director of The Grapes of Wrath, The Informer, How Green Was My Valley, She Wore a Yellow Ribbon, The Horse Soldiers, Drums Along the Mohawk and The Man Who Shot Libery Valance was a superb visual composer and one of Hollywood’s most economical story-tellers bar none. His films were always layered and understated with sub-currents that never flowed in one simple direction. His films always seemed fairly obvious and sometimes sentimental …at first. Then you’d watch them again and reconsider, and they always seemed to be about a lot more. 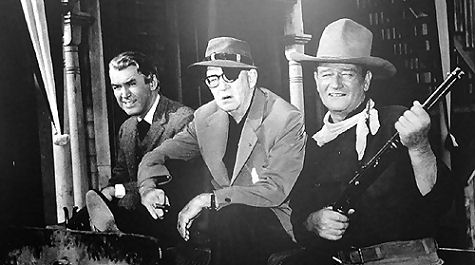 Bogdanovich actually made Ford in 1971, but he was never very happy with that earlier version. The current version still has the Orson Welles narration and a trio of warm, hilarious, fascinating interviews with John Wayne, Henry Fonda and James Stewart. These three alone make the doc worth seeing. The interviews were shot in 35 mm and very carefully lit and framed. The fact that Wayne, Fonda and Stewart have all moved on to the next realm makes it all the more affecting.

The other big extra is an audio tape of a 1973 heart-to-heart between Ford, then lying on his deathbed, and his lifelong love interest Katharine Hepburn (they fell for each other during the making of Mary, Queen of Scots). At one point you can hear Ford tell her that he loves her. It’s the kind of thing a guy like Ford would only say knowing that the clock is ticking and he’d better spit it out while he can still breathe. 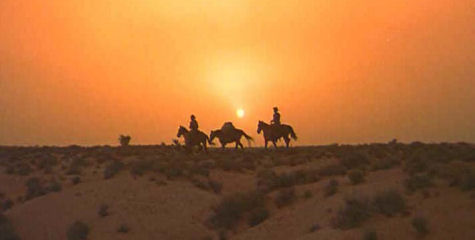 I love Spielberg’s recollection about meeting Ford and being brusquely told how he’ll never be a decent director until he learns to frame landscapes without the horizon being dead center. I take pictures every day and I don’t think I’ll ever forget that lesson. I know I won’t.

I’m still bothered by the phoniness and jacked-up sentiment in just about every one of Ford’s films. The Irish clannishness, the tributes to boozy male camaraderie, the relentless balladeering over the opening credits of 90% of his films, the old-school chauvinism, the racism, the thinly sketched women, the “gallery of supporting players bristling with tedious eccentricity” (as critic David Thomson put it in his Biographical Dictionary of Film), and so on.

But I now feel that I’ve finally come to know and very much like Ford the man. Maybe some day the stuff that still irritates me about his films will cease; maybe not. But I know my attitude about the guy has definitely been altered by Bogdanovich’s film. I presume I’m not the only one, or at least that I won’t be after it airs tomorrow night.

Paramount’s done it to Zodiac again!! David Fincher‘s hunting-the-zodiac-killer melodrama was going to open on 1.17.07 — now the national release date has been bumped to 3.2.07, according to Box-Office Mojo. And this for a movie that will absolutely be finished and ready to screen by 11.10 or 11.15, according to a well-placed source.
I’m sure we’ll be hearing a nicely measured, sensible-sounding explanation within the next day or two. Example: “March is a better release date than mid-January and we want this film to be as big a hit as possible .” I know they aren’t burying it — if they wanted to do that they’d release it in mid-April. One definite advantage from Paramount’s perspective is that now they won’t have to bother with Zodiac in the middle of their Oscar campaigns for Dreamgirls and World Trade Center, which will be more than enough fish to fry for their p.r. team. One other plus is that guys like me can no longer bellyache about their refusal to give it a late-December platform opening.
All I know is, Paramount just won’t stop treating this movie like a poor relation and kicking it around like a tin can. They obviously don’t feel it’s very commercial, they don’t want it in the way, and so they’re keeping it on the bench a few weeks more. The delay certainly isn’t due to any plans for extra work to be done. Even if Fincher wanted to go out and shoot extra footage right now Par could still release it by 1.17 — George Hickenlooper‘s Factory Girl is doing extra lensing as we speak and yet it’ll be shown to critics by early December and released into theatres about three weeks later.

In her N.Y. Times piece about the origins of The Nativity Story (New Line, 12.1), Sharon Waxman says it came about because three of the principals — director Catherine Hardwicke, producers Marty Bowen and Wyck Godfrey — wanted to make a film of lasting value that would reconnect them on some level with their rural/family roots. I’m not doubting their sincerity — who doesn’t want to make a film that means something and sticks to the ribs? — but I smell hucksters in sheep’s clothing. 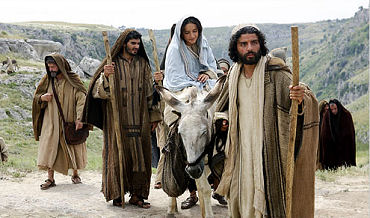 Amazing…startling: New York City cops have arrested a blue-collar guy who’s allegedly confessed to killing actress Adrienne Shelly in a furious rage. The 40 year-old actress was found hanging from a shower rod in a West Village apartment last Wednesday. A New York Post story that ran on Friday said that “law-enforcement sources said they are inclined to believe Shelly’s death…was a suicide, noting there was no sign of struggle or forced entry in the fourth-floor apartment.” But a CBS News report says that a 19 year-old constructon worker named Diego Pillco has told cops that he “punched” Shelly “after she complained about the noise he was making in the West Village building where her office is located,” and that the blows killed her. (Unless he’s Joe Louis and he just hit her once.) Pillco then “allegedly admitted to dragging the body up to her office, and positioning her in the shower to make her death look like a suicide.” The CBS report says that “the medical examiner’s office had not yet ruled whether Shelly’s death was a homicide or a suicide.”

“I had lived my life believing two things — that pain should not be sought, but, by the same token, it should never be avoided, because there is a lesson in facing adversity. Having gone through that experience, I can attest, in a non-masochistic way, that pain is a great teacher. I don’t relish it, but I learn from it. I always say, even as an ex-Catholic, that God sends the letter, but not the dictionary. You need to forge your own dictionary.” — Pan’s Labyrinth director-writer Guillermo del Toro, speaking to The Guardian‘s Mark Kermode.

The highlights of Russell Crowe‘s “60 Minutes’ interview with Steve Kroft are all here. Fascinating stuff — you can’t just watch one clip. I liked Crowe’s statement that in Australia, the phone-throwing thing would have been resolved “with an apology and a handshake.” You know…the way John Wayne would’ve handled the after-effects of a fist fight in a John Ford film. 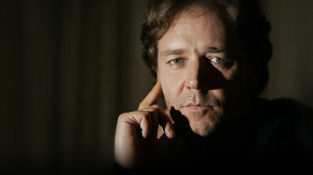 But in the world we’re contendng with over here (and this is HE speaking, not Crowe)…a world filled with manly hotel employees who say “whatever” when a customer has a problem and then run to their attorneys looking for a cash set- tlement to help them get over the shock of their little-bitch attitude coming right back at them, things are different.

On or about 6.1.06, when I was posting my daily material from a wi-fi cafe in Montmartre, I reported that Andrew Dominik‘s The Assassination of Jesse James by the Coward Robert Ford — i.e., Brad Pitt‘s other ’06 movie besides Babel — would not be released by Warner Bros. on the then-posted date 9.15.056, but rather some time in early 2007. This meant that some reconfiguring was going on and Team Jesse needed time to fix certain problems, etc. 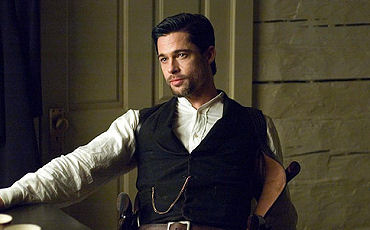 Now comes a Kevin Williamson piece in the Calgary Sun reporting that the fillm’s “ambiguous” ’07 release date (not…it’s always been February or March) has been clarified by producer Tony Scott as February ’07. (I called a Warner Bros. p.r. rep for a precise date — she didn’t pick up.) Scott told Williamson that “we have to be careful how we market it because it’s like a Terrence Malick film. But it’s really good and Brad’s terrific in it — he just gets better with age.”
Pitt, naturally, plays the title character. His costars include the always-creepy Casey Affleck (as Ford), Sam Rockwell, Sam Shepard, Mary-Louise Parker and Zooey Deschanel.

“Hollywood is in the midst of a strategic shift,” N.Y. Times reporter Laura Holson writes for the Monday, 11.6 issue. “The average cost to make and market a movie has skyrocketed — to $96.2 million last year, from $54.1 million in 1995 — while lucrative DVD sales have flattened. Major film studios are fending off illegal piracy, which industry executives say accounted for $1.3 billion in lost revenue in the United States last year.
“The growth of new media threatens to undermine traditional businesses, while studios are flummoxed about how to take advantage of the new opportunities they represent. And movies and TV also face tough new competition from video games and online social networking sites. Even cellphones have become a favorite diversion among the young.
“As in so many other show business debates, money and control are at the heart of the matter. And without solutions to these problems in sight, relations between talent and the studios are more strained than ever.”

Empire is reporting that Spike Lee is in negotiations to direct a sequel to Inside Man — excellent news. Lee is said to be “already working with the original screenwriter Russell Gurwitz.” Insufficient details! This is truly a nothing item. It’s getting late, all right.

More reactions to Daniel Craig‘s James Bond, of a generally more positive nature than views spouted by “Manhattan Movie Guy” and assembled by the BBC. The London Times has said that Craig “is up there with the best — he combines Sean Connery‘s athleticism and cocksure swagger with Timothy Dalton‘s thrilling undercurrent of stone-cold cruelty.”