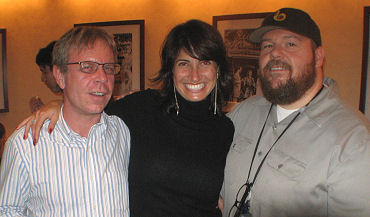 No disrespect to Clint Eastwood‘s Flags of Our Fathers, but Letters From Iwo Jima — a sad elegiac portrait of the Japanese defenders of Iwo Jima during that horrific battle in early 1945 — is a much better film. It’s sadder, cleaner and more primal, for one thing, and the absence of all the cutting back-and-forth between the battle and the bond tour in Eastwood’s earlier Iwo Jima visitation feels like a kind of blessing. 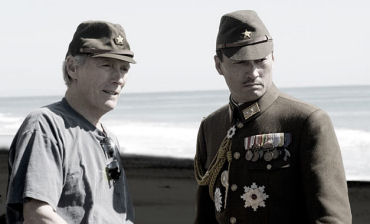 The sense of increased focus in this Japanese-language film is immediately apparent, yielding as it does a more earnest humanistic aura along with a story that feels far more tragic. The Japanese troops know from the get-go that they haven’t a hope of victory against the American invaders, and so Letters quickly falls into relief as a compressed, bare-bones meditation about an eternal question that tugs at us all — how to live bravely and honorably in the face of certain death.
As Todd McCarthy has noted in his just-up Variety review, “considered from the Japanese angle Iwo Jima resembles the Alamo — a futile if heroic last stand against an enemy force too overwhelming to withstand, although withstand it they did, for much longer than their opponents imagined possible.”
Letters delivers at least three performances that are unquestionably more affecting than the respectable but muted ones in Flags — Ken Wanatabe‘s as General Tadamichi Kuribayashi, a portrayal of a combat-averse foot soldier named Saio by the unknown Kazunari Ninomiya, and Tsuyoshi Ihjara‘s as Baron Nishi, a kindly cultivated officer with a fondness for horses.
For the first time an American-made film is not only showing us what it was like for Japanese troops to fight U.S. forces — it’s a fascinating thing to consider guys from “our” side as faceless grunts and deliverers of doom — but provides insight into basic Japanese values of that time, not just in a military sense but in terms of their homeland, families and indeed their eternal spirits. 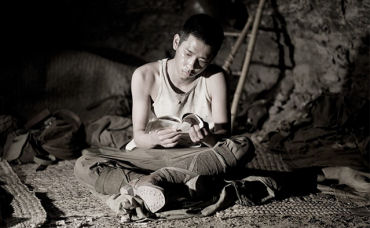 Letters starts out a bit slowly and carefully, and it feels a bit choppy and abbreviated in the early stages of the battle. But once it gets going — particularly during the second half, with the strongest portions coming during the final third — it delivers the goods and then some. Eastwood has reason to feel very proud. And lucky, in a sense. Something deep down told him he should attempt a Japan- ese-side-of-the-battle film while shooting Flags, and it was a good instinct.
In early October I heard from from a big-name critic who’d recently seen Flags that a person he spoke to from Eastwood’s camp had told him that as good as Flags was, Letters was the superior film. I’ve been hoping all along that this would turn out to be true. I had the heebie jeebies just before last Sunday’s Letters screening began, but less than five minutes in I knew the Eastwood-camp guy was right.
Watanabe should absolutely be added to the tally of Best Actor contenders — his Kuribayashi is cut from the same heroic, humanistic cloth that has begotten all great military leaders. The on-screen ones, I mean.

I realize that yesterday’s National Board of Review awards were damaged goods from the get-go, given the org’s idiosyncratic oddball rep and all. But the Letters From Iwo Jima Best Picture win was nonetheless a good thing, if for no other reason that the startle factor. That aside, I had four significant beefs with the hand-outs.
(a) The Best Supporting Actor trophy going to Blood Diamond‘s Djimon Hounsou felt like an especially deranged call. Honsou’s acting in that film is emotionally excessive — he has two emotional-outburst moments are flat-out idiotic. The worst is a scene in which he and Leo are hiding in the dark from a platoon of bad-ass hip-hop rebels — very dangerous, hair-trigger cats armed with automatic weapons — when the crouching Honsou suddenly sees his kidnapped, long-lost son among them. Naturally, this being an Ed Zwick film, he immediately jumps up and shouts out, “Son!” He should have died right there and then. All stupid people (i.e., those without the sense to hold themselves in check when their lives are in danger) deserve a bullet in the head.
(b) The Best Supporting Actress award going to For Your Consideration‘s Catherine O’Hara means that NBR voters thought she was more deserving than Cate Blanchett (Notes on a Scandal, Babel); Jennifer Hudson (Dreamgirls); Ivana Baquero (Pan’s Labyrinth); Adriana Barraza (Babel); Carmen Maura (Volver), Abigail Breslin (Little Miss Sunshine) or Babel‘s Rinko Kinkuchi. That’s just absurd.
(c) The NBR’s Best Original Screenplay went to Stranger Than Fiction‘s Zach Helm because they wanted to honor Helm’s inability (refusal?) to define the metaphysical system in that film? At no time do you clearly understand whether Will Ferrell’s tax man is some kind of organic but basically “fictional” guy living inside novelist Emma Thompson’s head, or, if he’s as “real” as you or me or Dustin Hoffman‘s character, how it is that Thompson’s decision to kill him off in her book is going to affect him. Helm’s screenplay is infuriating.
(d) The NBR omitting Florian von Henckel Donnersmarck‘s The Lives of Others from its top five foreign-film list is just nutso…a joke. The ones they went with are Volver, (the favorite), Curse Of The Golden Flower, Days Of Glory, Pan’s Labyrinth and Water.

“It’s tough getting a fix on the Best Picture race,” writes N.Y. Post film critic Lou Lumenick. “Everyone agrees that the much-hyped musical Dreamgirls (Dreamamount, 12.15) has the pole position. It’s a huge crowd-pleaser, but already the chattering classes are starting to pick at it with the sort of griping that eventually left recent Oscar front-runners Brokeback Mountain and The Aviator gasping at the finish line.
“On the other hand, the Academy loves even flawed musicals like Chicago — unless they’re complete botches like The Phantom of the Opera, Rent and The Producers.”
Rent was a complete botch? News to me. I don’t know why exactly, but from time to time I’ve had radically different reactions to this and that musical, and this was definitely a prime example. Last year at this time I wrote the following: “Call me emotionally impressionable, call me unsophisticated, call me a sap…but I saw Rent last night in Santa Monica, and in its vibrant, open-hearted, selling-the- hell-out-of-each-and-every-song-and-dance-number way, it’s a knockout and an ass-whooper and damn near glorious at times.
“I didn’t just like it…I felt dazzled, amped, alpha-vibed. I got into each and every song, every character and conflict…I settled back and went with it. People were applauding after almost every song, and the film really does give you a ‘whoa… this is special’ feeling.”

Okay, so the Weinstein Co. is still screening Factory Girl this week after all — today (Thursday, 12.7.06, 2:00 pm at Dolby 88 Screening Room) and Friday (1:00 pm at same location)…even though it doesn’t matter as far as next Monday’s New York Film Critics Circle voting is concerned because the film isn’t opening in NYC on 12.29.
A Manhattan journalist is saying my chronology in yesterday’s item was off: “What happened is that when the Factory Girl screening notice went out it stated that the film was only opening in Los Angeles, [and then] several NYFCC members pointed out that it was thus ineligble for our awards. That’s when they pulled the plug on the NYC screenings.”
So Weinstein Co. staffers didn’t realize their decision to not book Factory Girl into Manhattan theatres on 12.29 (they’re apparently looking to open it here in early February instead) disqualified it from NYFCC consideration? They were clueless about this until certain NYC critic-journos pointed this out?

Others may be interested in how “the great diva” Diana Ross is reacting — or plans to react — to Dreamgirls and/or questions about same from the media in the next few weeks, but I personally don’t give a damn, no offense. What does Diana Ross do all day exactly? Question withdrawn — I don’t want to know.

“Hilarious and sad — that’s what the National Board of Review has become in the last several years,” Fox 411’s Roger Friedman has written in response to yesterday’s announcement of the NBR Awards. “The hilarious part is because the movie studios hate it but keep it going so they have an award to tout in newspaper ads. The sad part is that the members don’t know what they’re doing, and no one respects them.
“When the NBRMP snubbed Dreamgirls, The Queen and several other excellent 2006 films Wednesday, they were finally revealed for what they are: bickering fans and not professional film critics. Their choices instead for the 10 Best Pictures of 2006 included two Clint Eastwood films, The Devil Wears Prada, Blood Diamond and Little Miss Sunshine.
“But who makes the final selections for those 10 films? It’s not the whole membership of the NBRMP, people who pay $600 (more than I had previously understood) to be part of this gang. It’s just a group of 12 called the Exceptional Photoplay Committee. That’s it.
“The committee is led by Annie Schulhof, sister-in-law of former Sony CEO Mickey Schulhof. Her qualifications? She’s wealthy and has the time to run the organization. After Schulhof, the committee list is harder to place. It’s a secret organization, kept that way because the members — with the exception of one, possibly two — are not film professionals. They are just rich fans.
“This column reported last year that Annie Schulhof had close ties to Warner Bros. But we could never have imagined those ties culminating in these results.”