“If someone looks like he hasn’t either bathed or been outdoors in weeks, he’s probably a blogger. Yes, even humble bloggers are invited to leave their attics and basements during Shmooze Season.” — Peter Bart in his 12.17 Variety column, titled “You Schmooze or You Lose.”

Between The Dead Girl and next year’s production of The White Hotel, Brittany Murphy is clearly casting her lot these days with dark, despondent material. Ron Rothholz is producing and Simon Monjack is directing from his own adaptation of the D.M. Thomas novel, which I haven’t read in eons. I remember, however, that the heroine, a haunted opera singer who goes to Sigmund Freud to examine visions she’s been having about a white hotel, the Nazi holocaust and her (unless my memory is going) her own death.
I’ve said it before — anything that people have tried but failed to turn into a movie for a really long time (The White Hotel has been kicking around since the early ’80s) has developed a hard-luck karma that’s akin to a kind of curse. From the first idea to the first weekend in theatres a movie shouldn’t take any more than five or six years — two or three or four is better. It may sound illogical and even warped to say this, but any film that’s failed to launch for ten or twenty years is probably going to feel too precious and removed from the hurly-burly when it hits the screen. 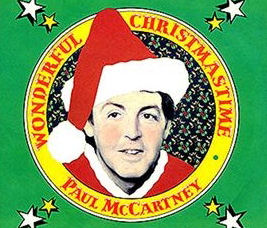 If you ask me, the Las Vegas Film Critics called it straight and true by awarding their Best Cinematography award to Children of Men dp Emmanuel Lubezki (a.k.a. “Chivo”). They also decided somewhat originally by naming Djimon Honsou as Best Supporting Actor for his work in Blood Diamond, and by toasting Thank You For Smoking‘s Jason Reitman for having written the Best Screenplay (original or adapted) award. Otherwise, it was the same old litany — The Last King of Scotland‘s Forest Whitaker for Best Actor, The Queen‘s Helen Mirren for Best Actress, Dreamgirls‘ Jennifer Hudson for Best Supporting Actress, The Departed‘s Martin Scorsese for Best Director. The Best Film Editing prize went to The Departed‘s Thelma Schoonmaker, and good for that.

Another Best Picture prize has been snared by United 93, not that this will change the minds of Academy members who’ve refused to see it all along. (Hang tough, guys — don’t let the critics guilt-trip you!) The Dallas-Fort Worth Film Critics have declared Paul Greengrass‘s 9/11 drama the best of ’06 while also honoring The Departed‘s Martin Scorsese as Best Director. The Last King of Scotland‘s Forest Whitaker and The Queen‘s Helen Mirren won again for Best Actor and Best Actress, respectively. And Jackie Earl Haley took the Best Supporting Actor prize for his work in Little Children. (Again, following his win earlier today among the Southeastern Film Critics.) There was a surprise, at least, with Cate Blanchett winning the Best Supporting Actress award for her performance as an obsessively-inclined art teacher in Notes on a Scandal. The org also named Clint Eastwood‘s Letters For Iwo Jima as the Best Foreign-Language Film, with Pan’s Labyrinth named as first runner-up in that category.

“Not long ago, the Bagger was at an event with a major film writer and director and ended up in a booth with him for several hours. He admired the man tremendously, [but] did not like his last project. Finally, the subject came up and the Bagger told the truth, after which there was suddenly very little to say. Later, he asked a colleague with more experience if he had been wise to speak his mind. ‘No, that was profoundly stupid,’ he was told. ‘They really don’t want to know the truth.'” — from David Carr‘s latest Oscar-related posting, “Ten Things I Don’t Hate About You, or At Least Your Movie.”
Carr’s friend was right, but I’ll never forget the shame I felt eight years ago when I lied by saying something encouraging and enthusiastic about Armageddon to its producer, Jerry Bruckheimer, at an early-bird industry screening. That Michael Bay film felt way too forced and agitated. As Variety‘s Todd McCarthy famously said at the time, the pace felt to me like that of “a machine gun locked in the firing position.” A guy in the know told me a week or so later that Armageddon was “frame-fucked…the length of every last shot was cut down to the absolute bare minimum to keep it moving as fast as possible.”
Anyway, I saw Bruckheimer in the lobby right after the show and told him, coward that I was, that Armageddon “seriously rocks.” Jerry knew right away I was full of it; he gave me a look that said, “Huh, that”s funny…you’re lying to me and you’re doing a bad job of it.” He didn’t look at me for the rest of the evening. Nice feeling, that.

“When the studios are in for a penny, they’re in for a pound. When you’re giving them product, then their nose is in the wind a lot more. If it smells good, they’ll run with it. But if it doesn’t, they’re not invested in it.” — The Painted Veil star Edward Norton to Hollywood Reporter/”Risky Business” columnist Anne Thompson in her 12.18 column. 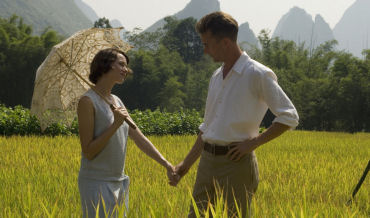 This is the money quote that pretty much explains why Veil producer Bob Yari is flustered about what he sees as faint Warner Bros. support in terms of “For Your Consideration” Oscar ads for The Painted Veil. The bottom line is that Warner Bros. honchos have put a damp finger to the wind and decided that the film doesn’t smell all that good — that it’s a respectable stiff.
This despite its high-pedigree credentials (an adaptation of a Somerset Maugham novel, shot in rural Chinese locations, well-rendered 1920s period sets and costumes), mildly interesting performances and Stuart Dryburgh‘s eye-filling cinematography. As Slant‘s Jason Clark has written, Veil “is more or less from the school of motion picture that Pauline Kael used to say ‘reeks of quality.'” And the import of the story….good heavens.
It’s basically about how a pretty young British woman (Noami Watts), under pressure from her parents to find a suitable mate, marries a dweeby stuffed-shirt bacteriologist (Norton)…and gradually comes to love and respect him for his character and steadiness and compassion for Chinese peasants afflicted with cholera. The message, in short, is that humorless prigs with commendable inner qualities make good husbands as long as the woman in question gives up all those immature ideas about heady romantic attraction, great sex and other spirit-lifting chemistries.
Watching this film a few weeks ago made me feel frustrated, impatient, bored — bees were buzzing in my head. 70 minutes into it I got up and asked the projec- tionist how much time was left, and when he told me there was another 55 minutes to go my heart just sank. I went back to my seat and told The Envelope‘s Tom O’Neil, who was sitting next to me, “I can’t do this”…and I left. As I was driving out of the parking garage I saw a woman who’d been sitting behind O’Neil and myself walking up the ramp. “You left too?” I asked. “Oh, God…please!”, she replied.
Yari, naturally, believes in the film and is fighting for it tooth and nail — the mark of a good producer. But The Painted Veil is one respectably doomed film if I ever saw one. That said, 67% of the Rotten Tomatoes critics who’ve posted so far have raved, liked it or gave it a qualified pass.
L.A. Times film reporter John Horn has written a similar piece about the same kettle of fish.