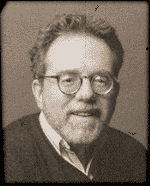 “Mass infertility…is an extraordinary premise for a film — a childless world — and it will leave some viewers feeling restive and underinformed. How, they will want to know, did this catastrophe arise? To director Alfonso Cuaron, however, the first rule of storytelling is: Go with the given. Don’t waste space on deep background, and don’t delay the action with a preface — remember Ben Kingsley, intoning like a royal robot at the start of Steven Spielberg‘s A.I.?
“Cuaron respects his audience, presuming that we are grown up enough (or ground down enough) to work out the horrors for ourselves.
“The people I know who have seen Children of Men have admired its grip, but they had to be dragged to the theatre; it’s a film that you need to see, not a film that you especially want to. I guess it should it be logged as sci-fi, yet by 2027 mankind is clearly beyond the reach of science, and the roughened pace of the film — photographed by Emmanuel Lubezki — leans away from fiction and toward the natural stutter of reportage.
“When a bomb explodes in Tony Scott‘s Deja Vu, it is tensely prepared for and filmed with a lingering gloat; when a bomb explodes in Children of Men, it bursts from nowhere on a dreary street. Even if you don’t buy the main conceit, the scumbled texture of the movie makes it feel not just plausible but recognizable, and Cuaron takes care never to paint the future as consolingly different.” — from Anthony Lane‘s review in the 1.8.07 issue of The New Yorker.

Is good old Hollywood Wiretap in a coma or what? The same story links have been sitting there for at least a couple of days, it seems, aside from Monday’s link to Nikki Finke‘s weekend boxoffice story. Hollywood blogmeisters aren’t allowed to have lives or take days off or any of that good stuff. I thought that was understood.

Hickenlooper Butt-Boy Dispatch #7b: The unfortunate haste with which Factory Girl has been thrown together has meant that some critics have seen slightly different versions. Some — critics for L.A. City Beat, L.A Weekly and Box-Office, apparently — were shown the very first rough cut that included most of the newly-shot footage but did not include the Santa Barbara psychiatric interview stuff (i.e., a brunette-y Sienna Miller recalling her Warholian adventures with a middle-aged female shrink). This is indicated by Wade Major‘s Box-Office review referring to the use of documentary interview footage (a la Reds), which was included for one screening but was finally not used. (The interviews were originally scattered all through the film. The final version uses snippets during the closing credits.) 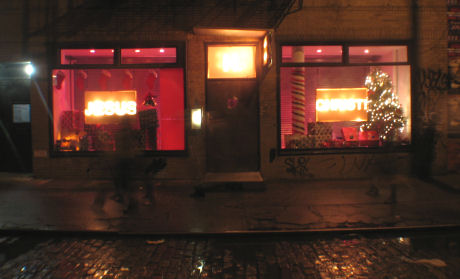 A Soho business establishment called Jesus H. Christ! (you can’t see it due to glare, but the “H” is in the center window right above the door) — the fact that a store with this name would never open in Corpus Christi, Texas, is one of the reasons I truly adore New York City; dead chicken; Chinatown vegetable guy; live fish gasping for breath; fire station memorial; plaque; side by side; barrel fire
January 1, 2007 5:03 pmby Jeffrey Wells
7 Comments
SOAP Noms, Awards

I think we can all agree that the culture really and truly needs right now another media-related group getting together to hand out year-end awards. Hence, SOAP — the newly-formed Society of Online Awards Prognosticators, the brainchild of And The Winner Is blogmeister Scott Feinberg with members including myself, Sasha Stone and Anne Thompson — has electrically come into being.
The SOAP’s 2007 nominations will post on Sunday, 1.14 — nine days before the Academy noms are announced — with SOAP winners to be announced on Wednesday, 2.21, i.e., four days before the 2.25 Oscar telecast.
The other members: Johnny Alba, The Oscar Igloo; Mark Bakalor, Oscar Central; Carlos Reyes, Oscar Diary; Nathaniel Rogers, The Film Experience; Andy Scott, Everything Oscar; and Giovanni Tagliaferri, The Oscar Jam. 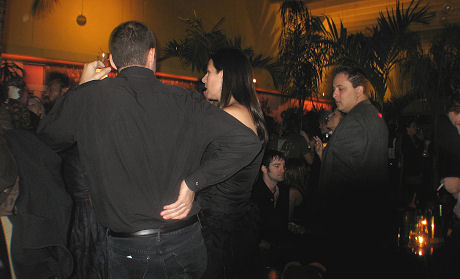 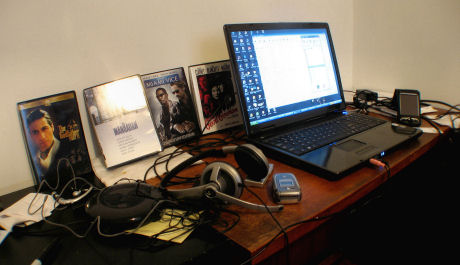