In a New Yorker piece called “The New Disorder,” David Denby discusses the trend of dense, complex, interwoven plots in movies from Pulp Fiction to Babel.

“The Guillermo Arriaga-Alejandro Gonzalez Inarritu films are hardly the sole topsy-turvy narratives out there,” he notes. “In recent years, we’ve had movies, like Adaptation (written by the antic confabulator Charlie Kaufman), that are explicitly about the making of movies, and others, like Eternal Sunshine of the Spotless Mind (also written by Kaufman), that move forward dramatically by going backward in time.

“Then, there is a related group of clogged-sink narratives, like Traffic, Syriana and Miami Vice, which are so heavily loaded with subplots and complicated information that the story can hardly seep through the surrounding material. Syriana made sense in the end, but you practically needed a database to sort out the story elements; the movie became a weird formal experiment, testing the audience’s endurance and patience.

“Some of the directors may be just playing with us or, perhaps, acting out their boredom with that Hollywood script-conference menace the conventional ‘story arc.’ But others may be trying to jolt us into a new understanding of art, or even a new understanding of life. In the past, mainstream audiences notoriously resisted being jolted. Are moviegoers bringing some new sensibility to these riddling movies? What are we getting out of the overloading, the dislocations and disruptions?”

“After the wonderfully imaginative Mexican movie Pan’s Labyrinth chalked up three quick victories — for art direction, makeup and cinematography — it must have looked to most people like a major upset when it lost best foreign-language film to the German The Lives of Others,” writes Newsweek‘s David Ansen.

“But the entire Academy doesn’t vote in this category, only those members who have seen all five nominated films. Which means that closer to 500 people, rather than 5,800 (the membership of the Academy), choose the winner, and anyone with his ear to the ground could hear the enthusiasm that Florian Henckel von Donnersmark‘s tale of the East German Stasi generated in Hollywood screening rooms.

“Had The Lives of Others gotten a wider release in ’06 (it only played a one-week qualifying run in Los Angeles) it would probably have received nominations in other categories as well, such as original screenplay and perhaps even direction.”

Zodiac director David Fincher “is not a police-procedural-type guy. He’s not a people-type guy. He’s a mood ghoul. I don’t think he can relate much to moral outrage. What occupies him is how to send you home antsy, unsure of what you’ve seen but sure it was worse than you think. He gives you the existential willies.” — from New York critic David Edelstein‘s just-up review. 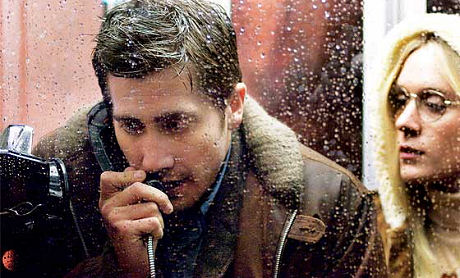 Defamer has posted a video of Clint Eastwood‘s wife Dina brushing something off his lap during Martin Scorsese‘s thank- you speech, and it’s nothing. And to see it, you have to sit through the whole sequence — Coppola/Lucas/Spielberg presenter jive, the big announcement, Scorsese kissing and hugging those near and dear, addressing the audience, thanking the Departed cast, etc.

Every year comes the post-Oscar sourpuss reviews. But it didn’t feel boring or torturous to me. You sit there and watch the damn thing and absorb the win-lose drama for just over three and a half hours, and then it’s over and you figure who got the best scores and won the most money. I don’t see the problem. Eat the chips and the dip and down a few beers.

Columnists always bitch about this and that. This presumably leads to a certain sharpening and honing, and perhaps a slightly better show next year. But last night’s was far from painful. That Errol Morris nominee-interview reel was pretty good; so was the Michael Mann montage that tried to show how America portrays itself in its films. I liked the Dreamgirls musical number, even.

Yeah, it was clunky or oddly edited or poorly paced here and there. It was flat or cornball or unsuccessful in this and that fashion. But it’s the Oscars…what do the sourpusses expect? And what’s so long about three hours and change?

I didn’t have a big issue with host Ellen DeGeneres. She seemed relaxed within her talk-show host skin — confident, bright, quick, chatty. I would have preferred someone nervier and willing to use a sharper scalpel, but DeGeneres simply isn’t that person. The patter on the Oscar show is never that brilliant or urbane or off-the-cuffy (except for the occasional zinger like George Clooney‘s remark about Jack Nicholson and Al Gore drinking backstage), but it never grated.

The people who produce the Oscar show are seemingly hired for their industry relationships as much as their vision about how the show might play. The producers (Laura Ziskin, Gil Cates) are always in their upper 50s or 60s or beyond. I hate ageism, but if the people doing the hiring wanted to really spunk things up, they’d have to hire someone younger and a bit hipper….but it never happens.

I don’t think the Oscars are supposed to be that all that brilliant or dazzling — they’re meant to be slick and eye-poppy and just hip enough so that no demo- graphic feels terribly burned. I think that more or less happened last night with Ziskin’s show. No one at the party I attended seemed all that repelled by it. I wasn’t, I can tell you.

In Contention‘s Kris Tapley wants it understood that he wasn’t with Eddie Murphy “to the last,” even though the last Gurus of Gold listing shows him having voted for Murphy as his #1 choice. That chart, however, is dated 2.16.07, he tells me, so as of today it’s ten days old. (All I did this morning was simply reference the last Gurus of Gold and Buzzmeter charts.) Kris’s final In Contention calls, in which he predicted Arkin to win, is dated 2.23. He also claims he was the first guy on the block to say the award was Arkin’s to lose, immediately after the nominations.

I’m all for rubbing salt in wounds, but I’m not entirely trusting that story about Eddie Murphy allegedly leaving the Kodak auditorium last night after he didn’t win the Best Supporting Actor Oscar. A reader named Michelle wrote about 100 minutes ago that she had heard KTLA movie guy Sam Rubin report about Murphy’s abrupt departure this morning, but I talked to Rubin about 40 minutes ago and he said, “I didn’t talk about that.”

I spoke to a Paramount publicist who was working at the Kodak last night, but said he was doing something else when the Best Supporting Actor Oscar was given to Alan Arkin and that he didn’t notice if Murphy had left the auditorium early or not.

I called Murphy’s publicist, Arnold Robinson of Rogers and Cowan, for a confirmation or denial,. Robinson’s reply (passed along by an office assistant) was, “We don’t know when Murphy left the auditorium” and “We have no comment.” An hour later I spoke to another Paramount publicist who told me it’s not unusual for a star’s publicist to leave the Kodak early if their client hasn’t won, and to therefore not be aware when the client left.

It sounds like Murphy might have left the auditorium early and that no one near him wants to confirm or deny, but it hasn’t been confirmed that Murphy bolted so this is neither here nor there. (Wasn’t Bill Murrray on the verge of leaving when he didn’t win Best Actor for Lost in Translation?)

Fox 411‘s Roger Friedman went with the Murphy-bolted story this morning. No stated sources, no quotes — he just says it happened.

“No one is expecting David Geffen to spend his days golfing, but there is a danger that if the coming election becomes his full-time hobby, his precision ruthlessness will distort the public process,” writes N.Y. Times reporter David Carr. “After all, this is not a movie sale, a busted deal or a Don Henley album; this is about the duly elected leader of the United States.

“Geffen and Ron Burkle, another Los Angeles billionaire who is a staunch ally of the Clintons, have already fought for custody of the Los Angeles Times. No one wants to see the presidency treated as a cat toy between rich men who don√É¬¢√¢‚Äö¬¨√¢‚Äû¬¢t like to lose.

Alan Arkin‘s triumph last night over Eddie Murphy “was one of only two times I actually cheered,” Manhattan movie journalist Lewis Beale confided this morning. “The other was when The Lives of Others won [for Best Foreign Language Film].” Me too. I didn’t exactly cheer when Arkin won — I murmured a quiet little “thank God” to myself, feeling a huge sense of relief — but I whoo-whoo’ed my ass off when Lives director-writer Florian Henckel von Donnersmarck bounded out of his seat. But I also clapped and grinned a lot. It was a great show.

Even though I only got 16 out of 24 correct. I won nothing, and have only myself to blame.

I never seem to pay much attention to the short films and the tech awards, so for guidance in these categories I relied on (a) the consensus picks that came out of Stone‘s final Oscar chart/poll and (b) a list of picks that The Envelope‘s O’Neil ran the other day. I should have spitballed my own calls.

It was a beautiful night all around. A spiritual one, really. The right people won, and the vibe was not only cheerful and alpha but almost zen-like at times.

We all knew An Inconvenient Truth was going to win the Best Feature Documentary Oscar, but hearing the title called out and then seeing Al Gore and the gang standing together and saying the right things felt like a moment of real transcendence — an affirmation of the importance of the film’s message, and a belief — a realization — that it’s catching on nationwide and worldwide. The vibe got even better when Melissa Etherdige‘s “I Need To Wake Up” won the Best Song Oscar.

The ogre David Poland will resent me for bringing this up, but I’ll never forget his writing early on that An Inconvenient Truth was “a movie nobody wants to see.”

I’d be remiss and lying if I didn’t admit to feeling delighted when Eddie Murphy lost. I stuck my neck way out with the stuff I wrote about him and his chances, and we all know I’d be taking a heavy pounding today if he’d won.

Speaking of poundings, all the pro-Eddie Murphy prognosticators need to ask themselves why they stuck by that extremely likable and wonderfully gifted artist despite the writings on the wall.

Here’s the Big Moment..the Best Picture Oscar handout. It’s going to be Little Miss Sunshine, I can feel it, it is….I think. And the Oscar goes to The Departed…deserved! No problem at all…my favorite fim, after all. But we all know it was a very close vote. A few votes either way. Anyway….good news.